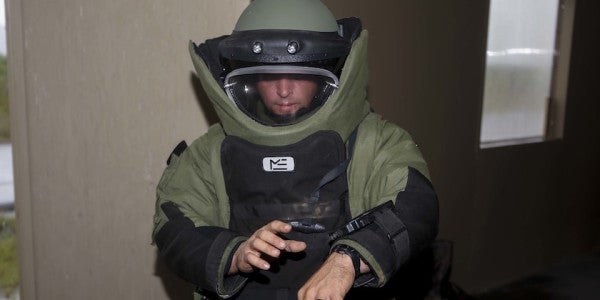 Ismay, a former Navy explosive ordnance disposal technician who served in Iraq during the surge, went to sleep early in the morning after working through the night, combing intelligence reports to keep up with guerilla explosive experts dreaming up innovative ways to kill U.S. troops.

By the time he woke up and read details of recent attacks emerging at his operations center near Tikrit, their tactics had already evolved.

“They changed that fast,” Ismay said.

Across Iraq and Afghanistan, bomb technicians like Ismay were watching the evolution of improvised explosive warfare in real time. Both battlefields became laboratories for insurgent groups to craft improved practices utilized by Islamic State group fighters entrenched in Mosul and Raqqa.

The two most recent U.S. deaths in the fight against the Islamic State group were bomb technicians, placing a spotlight on the use of improvised explosives devices on the battlefield and the people charged with keeping fellow troops safe from their destruction.

Navy Senior Chief Petty Officer Scott C. Dayton was killed in Syria on Nov. 24 near Ain Issa, roughly 45 miles north of the Islamic State’s self-proclaimed capital of Raqqa. He was killed by an explosion inside a house, a Navy official told the Wall Street Journal. Dayton is the first U.S. service member killed in the Syria operation.

Dayton’s death came weeks after Navy Chief Petty Officer Jason Finan was killed in his vehicle by an IED after warning other troops about a roadside bomb near Mosul on Oct. 20. Finan was attached to Navy SEALs advising elite Iraqi counterterrorism troops, Defense Secretary Ash Carter said after his death.

The devices are no longer just weapons that killed and maimed thousands of Americans during the wars in Iraq and Afghanistan. They have become a strategy unto themselves — a way to slow troop movements and paralyze convoys, suck up billions of dollars in research and development and shape the battlefield the way insurgents prefer.

The specific circumstances of the U.S. deaths remain unclear. But they point to the risks bomb technicians have taken in the fight against the Islamic State group as they become a front-line fixture.

Lt. Gen. Stephen Townsend, the commander of Operation Inherent Resolve, said Monday that EOD techs “will be at increased risk” during the campaigns in Iraq and Syria.

EOD techs are “bringing capabilities, and explosive disposal is one of those capabilities [Iraqi troops] are lacking in, and we’re trying to build that up,” Townsend said.

Iraqi troops have uncovered numerous IED factories that produced bombs on an industrial scale, flooding the battlefield with an endless supply of improvised munitions, Reuters and AFP recently reported. The Mosul offensive has been slowed from houses rigged to explode and hundreds of suicide car bombs ramming checkpoints and army convoys.

Frontline danger to EOD techs is not a recent phenomenon. The names of Dayton and Finan will be etched into a memorial wall at Eglin Air Force Base in Florida for fallen bomb technicians since World War II, joining 131 others killed since Sept. 11, 2001. About 250 more have been wounded.

But the Pentagon’s reliance on special forces troops to carry out combat missions in Syria and Iraq is a shift to more austere conditions, far from long tails of logistical support and on distant battlefields mined and booby-trapped by insurgents, Ismay said.

The typical EOD mission in 2006-2007 Iraq were requests from Army and Marine Corps infantry units to detonate IEDs in place on roads or houses, Ismay said, so they could continue missions to flush out insurgents and capture sectors to pass onto Iraqi units.

A large U.S. ground force with air superiority meant EOD techs could take their time circulating among units in armored vehicles, typically mine-resistant armored vehicles, which carried the essentials of the EOD missions — C-4 explosives, blasting caps and robots remotely piloted to guide charges to explosives or disarm them from afar, Ismay said.

The process was time consuming and relentless, with an average of 1,100 EOD missions a month in the northern sector of Iraq, a pace that “hasn’t been equaled in warfare since,” Ismay said. The pace meant intelligence gathering took a back seat to blowing up IEDs in place and moving on, he said.

EOD technicians were utilized strictly as combat support personnel, Ismay said. Commanders in Iraq “saw IEDs as obstacles to maneuver, like minefields,” he said, focused on the symptom of IEDs and not the networks creating and distributing them throughout the country.

A shift in use

That has changed in recent years, at least in the special operations community.

The shift is important in terms of how EOD techs are utilized and supported, said Brian Castner, a former Air Force bomb technician and author of All the Ways We Kill and Die, a book on the hunt for bomb makers in Iraq following his two deployments in 2005 and 2006.

Castner went on missions with Army Special Forces soldiers to provide explosive disposal and site intelligence support, where the vagaries of IED construction and placement were fed into information systems to piece together how bombs were distributed in an attempt to directly target networks.

While Castner stressed many of the details surrounding the deaths of Dayton and Finan are unclear, he said special operations missions can spike the risk for EOD technicians.

Staff Sgt. Justin S. Bryant shows a high school robotics team that the MK-2 Talon Robot can climb over objects during a demonstration at Swansboro High School in Swansboro, N.C., Nov. 17, 2016. The Marines have been coming to the school for the past three years to help inspire the student’s creativity. The Marines are explosive ordnance disposal technicians with Explosive Ordnance Disposal Company, 2nd Marine Logistics Group.

“You don’t have time and distance to do much” when maneuvering quickly, he said. “You don’t have robots and you’re a lot closer to the device than you should be.”

The fluid nature of those missions also means EOD techs are limited in what they can carry. A 100 pound-plus load after armor, ammunition and water leaves less room for explosives and detonation cord. Space is also a premium for supplies in small mobile vehicles such as the pickup trucks utilized by special forces troops.

EOD techs deploy a fleet of tracked robots, like the Foster-Miller TALON and iRobot Packbot variants, to defuse and destroy explosives. The robots are typically about 100 pounds or more and are impractical, if not impossible, to carry on special forces missions like capturing or killing high-value targets, Castner said.

Some smaller robots were designed to be carried, but physics often wins out, Castner said, when a bulky robot strapped to a rucksack takes up vital room.

“Take a robot, or take food, water, explosives and ammo. You’re going to take the second one,” he said.

The absence of robots on missions where IEDs are expected carries a significant drawback in terms of safety, Castner said. He had very clear guidance for junior EOD techs under his command when they encountered IEDs.

“First use the robot, and if it breaks, use the second robot. If the second one breaks, wait and call me on the radio and I’ll send you a third,” he said. “It’s got to be really bad situation not to use one.”Castner pointed to an example from Afghanistan in 2011, when Air Force Tech Sgt. Kristoffer M. Solesbee and Staff Sgt. Joseph J. Hamski, both EOD techs, were killed when they entered a house rigged to explode following a helicopter insertion.

They did not utilize a robot on that operation, Castner said, which certainly increased their risk.

The services have been slow to figure out exactly how to utilize EOD techs effectively, Ismay said. Even components within branches are at odds to define their value, he said.

Only recently did the Army create specialized EOD units that somewhat mirror capabilities of special operations, Ismay said. A single company, the 28th EOD company based at Fort Bragg in North Carolina, is airborne qualified and supports the 75th Ranger Regiment.

Meanwhile, Navy SEALs view EOD capabilities as so vital on IED-laced battlefields that having a dedicated EOD technician is a go or no-go variable for a mission, Ismay said.

“The arrow of history is pointing to more IEDs, not less,” he said.

The doctrine and use of EOD techs is not keeping pace with creativity in the Islamic State and other insurgent groups, which possess their own research and development arms, Ismay said.

“We spent billions to create signal jammers” to defeat wireless IED detonation. So the enemy went to command and crushed wire. We fixed one problem and created two new ones,” he said.

Rules of engagement shifted in Iraq to allow troops to engage suspected insurgents digging into roads to potentially plant IEDs near the surface. Bombers there responded by planting explosives in culverts, where activity was not considered a hostile act.

The shift made IED strikes more deadly, not less.

“The bomb is more effective because the underside of vehicles is the weakest point,” Ismay said.

Castner stressed the recent bomb technician deaths do not point to extreme changes in procedures.

“They’re not doing something different. They’re just not blended in” among other U.S. casualties as in past operations in Iraq and Afghanistan, he said.

Ismay pointed to something that cannot be learned at the EOD schoolhouse or gained from experience on the battlefield: luck.

“Think of all training and resources Dayton had. The best of everything,” Ismay said. “You can be the best in the world at this job and there could be something that gets you. It’s combat. The enemy gets a vote.”