Meet the Army veteran behind the iconic ‘Smokey Bear’ campaign

Smokey Bear turned 75 today, and if it wasn't for a Kettering man, Smokey wouldn't have been painted. The late... 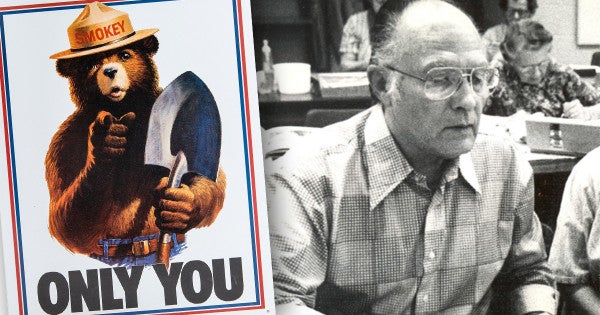 Smokey Bear turned 75 today, and if it wasn't for a Kettering man, Smokey wouldn't have been painted.

The late Harry Richard “Dick” Black was a contributor to the U.S Forest Service's Smokey Bear campaign in 1956 after several of his paintings appeared in the Saturday Evening Post.

The U.S. Forest Service's iconic wildfire prevention mascot was created by Albert Staehle in 1944 and Black painted the bear for 20 years.

Smokey Bear — no, he doesn't have “The” as a middle name — is one of the longest-running public service campaigns in the United States and has been honored this week with birthday celebrations across America.

Smokey was born in 1944, when the forest service and the Ad Council agreed that a fictional bear would be the symbol for a fire prevention campaign.

Federal officials of that time feared national forests could become targets as the country was deep into WWII.

Black was one of six children born to a Philadelphia family and bred during the Great Depression, Black lost his mother at age 12.

He worked as an assistant art director and graphic sketch artist in Philadelphia before joining United States Army Air Corps, the predecessor to the U.S. Air Force, during World War II.

Black was also a notable arts educator working at Sinclair Community College and the University of Dayton.

He taught the Sinclair lifelong learning classes art classes at Rosewood Arts Centre for at least a decade, said Shayna McConville, Cultural Arts Manager at City of Kettering and was the creator of Proctor and Gamble's “Mr. Clean.”

The forest service continues their campaign of #OnlyYou and encourage those who wish to participate to send in your videos to celebrate his 75th birthday.

The forest service and National Association of State Foresters are using the voices of Stephen Colbert, the CBS host of “Late Night,” Al Roker of NBC's “Today Show,” and comedian Jeff Foxworthy with an animated talking Smokey on online videos.

This iconic bear's anniversary comes as many scientists warn there is still a threat of forest fires with the threat that comes from climate change, but human-caused forest fires are still the number one concern.