New rules for servicemembers posting on social media make sense but they won’t stop scandals, according to a technology expert.... 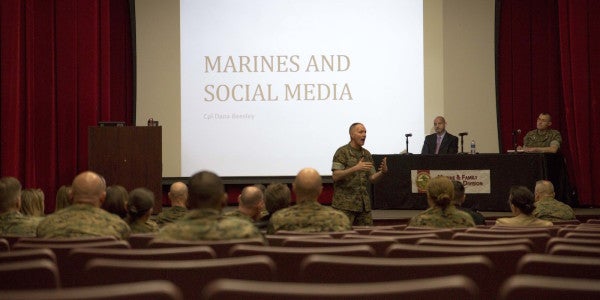 New rules for servicemembers posting on social media make sense but they won’t stop scandals, according to a technology expert.

The Army, Navy, Air Force and Marine Corps are cracking down on things servicemembers might be tempted to post online after a scandal involving shared nude photographs of female comrades on the Marines United Facebook group.

Allenby predicted there would be more scandals.

Service branches have laid out their expectations for online behavior in recent orders and messages.

In a Navy administrative message last month, Chief of Naval Operations Adm. John Richardson told sailors that standards of conduct apply “on and off duty and … in our physical lives and our virtual lives.”

Sergeant Major of the Army Daniel A. Dailey and Acting Secretary of the Army Chief of Staff Gen. Mark Milley wrote to soldiers and Army civilians last month telling them that misconduct on social media had deeply affected the military community.

“Active participation and passive tolerance of online misconduct are equally destructive to the foundational trust essential to our ability to decisively fight and win the nation’s wars,” a message from the leaders said.

Marine Corps Commandant Gen. Robert Neller ordered his officers and senior enlisted leaders to counsel every Marine on social media rules so they understand that online activity is an extension of their uniformed presence and must never discredit the Marine Corps.

“Marines should think twice before engaging in questionable online activities, and must avoid actions online that threaten the morale, operational readiness and security, or public standing of their units, or that compromise our core values,” he wrote.

However, new rules have been questioned.

Mark Bender, a former airman who runs YokotaTalk, a public Facebook group associated with Yokota Air Base, headquarters of U.S. Forces Japan and 5th Air Force in Tokyo, said the military doesn’t want servicemembers tarnishing its reputation. At the same time, people don’t appreciate losing their freedom, which is already restricted with nighttime curfews in Japan.

“People want to be free and something comes along where it seems so petty — you can’t swear online because we are afraid you are going to make us look bad,” he said. “That’s going to come under a lot of scrutiny.”

Bender’s philosophy as administrator is summed up in the group’s description, which states that YokotaTalk is not moderated and “there are no rules.”

That concept contrasts with other online forums associated with the military. Many limit membership to those at particular duty stations and have moderators who exclude people for posting off-topic information.

“In a lot of these forums that are run by servicemembers and family members, people try to place controls or restrict what people can post,” Bender said. The idea on YokotaTalk is for people to figure out the rules on their own.

“A lot of servicemembers aren’t very comfortable in that environment without people telling them what they can and can’t do, but it’s up to you to police yourself on YokotaTalk,” he added.

The freedom comes with risks.

People have gotten in trouble for things they’ve posted on the group, said Bender, who recalled a case in which a member of the community was described as a “playground Nazi.” The person being referred to turned out to be Jewish, he said.