U.S. Special Operations Command, in coordination with the U.S. Marine Corps, is looking into sources for a brand new lightweight... 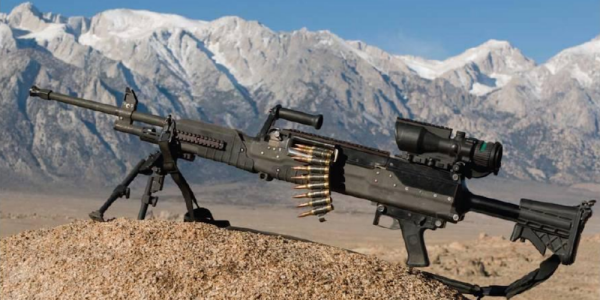 U.S. Special Operations Command, in coordination with the U.S. Marine Corps, is looking into sources for a brand new lightweight machine gun from weapons contractors, according to a sources sought listing published last week, one that can bridge the gap in distance and lethality between the 7.62-mm light machine gun and the .50 caliber M2.

In the listing, first reported by Guns.com, SOCOM specified the need for 5,000 lightweight medium machine guns that can fire belt-fed .338 Norma Magnum rounds from a polymer shell casing at a rate of 500 to 600 rounds a minute and “sufficient accuracy to engage area targets and vehicles at 2,000 yards.”

The focus on the belted .338 Norman Magnum is of particular interest due to the round’s association with long-range precision rifles, as the War Zone points out, First introduced in 2008 as a wildcat cartridge by American sports shooter Jimmy Sloan, the Department of Defense that years issued a market survey to assess its viability as a possible replacement for the standard issue M40 and M24, which fire 7.62×51mm NATO rounds sniper rifles.

SOCOM has been inching toward the highly efficient round for years. In 2016, the command officially selected the .300NM (based on the .338 casing) as its new advanced sniper rifle cartridge. Five weeks ago, SOCOM also published source sought listing for a sniper rifle system adaptable to fire the standard NATO rounds as well as .300NM and .338NM cartridges.

The superiority of the .338NM is a question of lethality over distance. “The 300 grain belted magnum round is touted as having a recoil similar to a 7.62mm NATO round while still being lethal out past 1,700 meters,” observes Chris Eger at Guns.com. “At 1,000 meters, the round is still capable of defeating Level III body armor and penetrating soft skinned vehicles.”

An April 2016 comparison of the Lightweight Medium Machine Gun equipped with .338 Norma Magnum rounds to other weapons systems.Photo via General Dynamics Ordnance and Tactical System

In all likelihood, SOCOM and the Corps will end up with the General Dynamics medium machine gun given that it’s currently the only one in production that can chamber the round. In 2012, the aerospace and defense contractor’s debuted a lightweight medium machine gun (LWMMG) designed specifically to accommodate belt-fed .338NM rounds, based on the M240 and weighing just 24 pounds and with a 24-inch barrel— right in line with SOCOM’s sources sought listing. From The War Zone:

In 2009, the Florida-headquartered subsidiary of defense contractor General Dynamics had identified what it felt was a machine gun “gap” and began working privately on a solution. The firm’s engineers felt that American combat experiences during the War on Terror had shown 5.56mm M249 squad automatic weapons and the aforementioned M240 light machine guns were man-portable for mobile operations, but might lack the range and power to attack enemies at longer ranges or behind hard cover. The venerable M2 was able to get at those opponents, but was simply too heavy for regular, day-to-day patrolling.

What the company ultimately crafted was a 24-pound machine gun with a 24-inch barrel firing the .338 Norma Magnum round at a sustained rate of fire of 500 rounds per minute. By 2014, engineers successfully demonstrated it could accept a sound suppressor, too. A complete package with its tripod, spare barrel, a 6x Trijicon ACOG optic, and 500 rounds of belted ammunition, was approximately 105 pounds. An M2 with a similar collection of gear would be three times heavier.

SOCOM and General Dynamics sound like a match made in heaven, especially after GD’s 2012 debut of the Norma-laden lightweight medium machine gun. “Combining the .338 Norma Magnum cartridge and their ‘Short Recoil Impulse Averaging’ recoil mitigation system, the LWMMG can engage targets out to 1700,” Soldier Systems wrote in March. “That round offers 5 times the energy of a 7.62 projectile at 1000 meters.”