The 75th Ranger Regiment, Green Berets and other U.S. special operations ground forces will be equipped with the conventional Army's Next Generation Squad Weapons 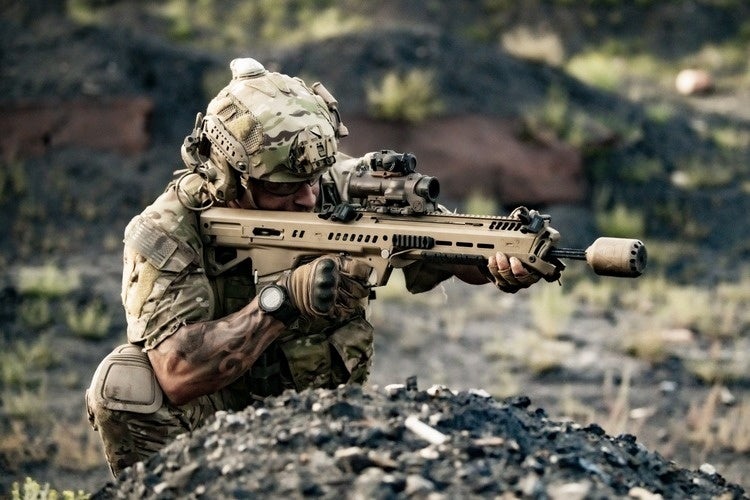 The 75th Ranger Regiment, Green Berets and other U.S. special operations ground forces will be equipped with the conventional Army's Next Generation Squad Weapons.

The Army is in the final phase of evaluating NGSW prototypes from General Dynamics Ordnance and Tactical Systems Inc., Textron Systems and Sig Sauer Inc. to replace the 5.56mm M4A1 carbine and the M249 squad automatic weapon in infantry and other close-combat units.

PEO SOF Warrior is working with the Army to become part of the NGSW fielding plan at some point over the five-year, future-year defense plan, Babbitt said.

U.S. Special Operations Command hasn't always been as supportive of conventional Army weapons programs, such as the failed XM25 Counter-Defilade Target Engagement System, which was known as the Punisher.

During an operational assessment, elements of 75th Ranger Regiment refused to take XM25 with them for a raid on a fortified enemy compound in Afghanistan, sources familiar with the incident said. The Rangers found the XM25 too heavy and were also concerned that the limited basic load of 25mm rounds was not enough to justify taking an M4A1 carbine out of the mission.

But this has not been the case with the NGSW effort, which has involved special operations forces in all of the soldier touch point evaluations.

“Our operators have been in from the beginning on the soldier touch points, and we have been working very closely with [Program Executive Office] Soldier all along,” Babbitt said. “Our operators … are providing feedback to help make the weapons better.”

The NGSW's auto rifle variant is so promising that PEO SOF Warrior may not go forward with a separate effort to develop a light machine gun chambered for 6.5mm Creedmoor, he added.

“We have currently put our 6.5mm Creedmoor lightweight machine gun on hold pending the results of the Next Generation Squad Weapon,” Babbitt said.