It's lighter, but still packs a punch. 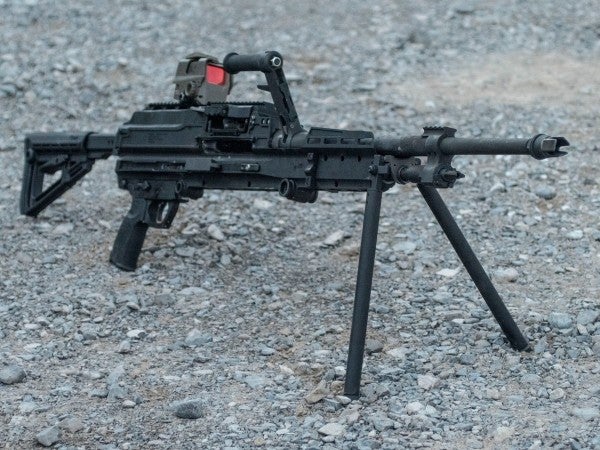 Sig Sauer is hoping to snag the Defense Department's contract for a new machine gun with the SLMG, the Sig Sauer Lightweight Machine Gun, which was unveiled this week at the Shooting, Hunting and Outdoor Trade Show, the Army Times reports.

U.S. Special Operations Command has been on the hunt for a new lightweight machine gun sinceMay 2017, when the command posted a sources sought notice for 5,000 belt-fed machine guns that, chambered in .338 Norma Magnum, weighed under 24 pounds.

Weighing in at 20 pounds and rocking a foldable stock, the SLMG appears to fit those requirements. A former member of Army's 3rd Special Forces Group and current Sig Sauer Academy instructor, Colin Murphy, claimed that the SLMG is “the lightest, most powerful machine gun on the face of the earth,” according to Military.com.

The SLMG fires 600 rounds a minute, Military.com reports, meeting SOCOM's requested rate of fire. It also fulfills SOCOM's requirement of having an effective range of 2,000 meters. Even better, Army Times reports that engineers at Sig Sauer are working on designing a “drum type” magazine that could be used as an alternative to belt-fed ammunition.

SOCOM also asked that the gun be able to use both suppressed and unsuppressed barrels. According to Sig Sauer, the SLMG isn't just suppressor ready, but tests haven't revealed any change in the weapon's rate of fire while using a suppressor, per Army Times

Indeed, the SLMG could “not only replace the M240 in most tactical scenarios but also provide enough reach and firepower in vehicle, boat and aircraft mounted .50-caliber machine gun configurations,” as Army Times reports.

It is worth noting, however, that this is Sig Sauer's first stab at a medium machine gun. When the contract was first announced in 2017 it seemed likely that SOCOM would end up with General Dynamics' 24-pound medium machine gun given that, at the time, was the only platform in production that can chamber the .338 Norma Magnum round.

Sig Sauer did not immediately respond to request for comment from Task & Purpose.

SEE ALSO: SOCOM Is Doubling Down On The 'Super SAW' Machine Gun

WATCH NEXT: The Next Generation Squad Weapon Gets A Major Update