Editor’s Note: This article by Amy Bushatz originally appeared on Military.com, a leading source of news for the military and... 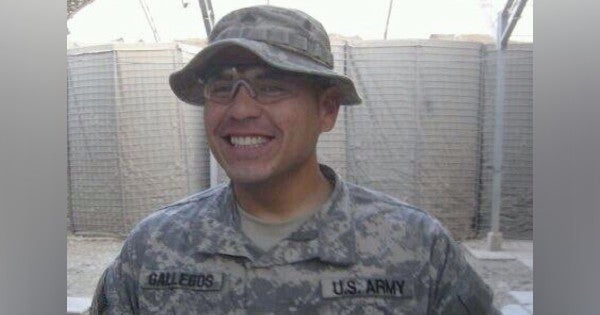 Editor’s Note: This article by Amy Bushatz originally appeared on Military.com, a leading source of news for the military and veteran community.

JOINT BASE ELMENDORF-RICHARDSON, Alaska — More than nine years after the Battle of Kamdesh claimed eight lives and left 27 injured, a soldier killed there received a posthumous medal upgrade Saturday to the nation's second highest honor, the Distinguished Service Cross.

Army Staff Sgt. Justin Gallegos, 27, had been posthumously awarded the Silver Star for his actions at Combat Outpost Keating, the location of the assault by Taliban insurgents that led to one of the bloodiest battles of the war in Afghanistan.”

The Distinguished Service Cross was presented here to Gallegos' son, MacAidan Justin Gallegos, 14, who lives in the area with his stepfather and mother, Amanda Marr. Marr and Gallegos were divorced at the time of his death.

“A couple weeks ago, when I heard the news that Justin's Distinguished Service Cross had finally been approved, I knew that one of the great discrepancies in the long narrative of the battle of Combat Outpost Keating had finally been corrected,” Maj. Stoney Portis said during the ceremony. Portis was Gallegos' commander at the time of the battle.

Called “a day for heroes” because of the number of heroic acts during the Oct. 3, 2009, battle, COP Keating was all but overrun when, just before dawn, Taliban fighters assaulted the outpost with machine-gun and rocket-propelled grenade fire.

“While under heavy fire for nearly an hour, Staff Sergeant Gallegos continued to suppress the oncoming enemy with the crew-served weapon. Once the weapon's ammunition was exhausted, he engaged the enemy with his M4 carbine to allow fellow Soldiers in a nearby truck to evacuate from their position,” it states.

As they attempted to join the unit defending the outpost, Gallegos retrieved and moved a wounded soldier to safety while under fire, then exposed himself again to ongoing machine-gun fire while trying to provide suppression and cover so the rest of his team could move to his position.

“During this final act, Staff Sergeant Gallegos paid the ultimate sacrifice,” the citation states. “Staff Sergeant Gallegos' actions enabled a section of Soldiers to regroup and provide necessary security to stave off enemy forces from the west side of the camp. His actions played a critical role in the defense of Combat Outpost Keating, and Troop B's subsequent counterattack against a numerically superior Taliban force.”

Medals of Honor have been awarded to two soldiers who fought at Keating, while 37 have received Army Commendation Medals with combat “V” device for valor, 18 were awarded Bronze Star Medals with “V” device, and nine received Silver Star Medals.

Upgrading Gallegos' medal was not a quick or easy process, requiring a literal act of Congress. The order for the upgrade was included in the 2018 National Defense Authorization Act. Saturday's ceremony marked the end of that journey, Marr said, shining a spotlight on Gallegos' heroic actions.

“We never really know what we're going to do in any situation that's like that, but I would've known that Justin would've been that person,” Marr said. “When I was notified, even, of his death, I knew that it had to be something extraordinary … there was not another explanation. Justin didn't die — he just fought hard. So I just knew.”

Medal of Honor recipients Staff Sgt. Ty Carter and Staff Sgt. Clint Romesha were in attendance at the medal ceremony, as was Sen. Lisa Murkowski, R-Alaska, who presented a flag to MacAidan Gallegos and a handful of veterans of the unit.