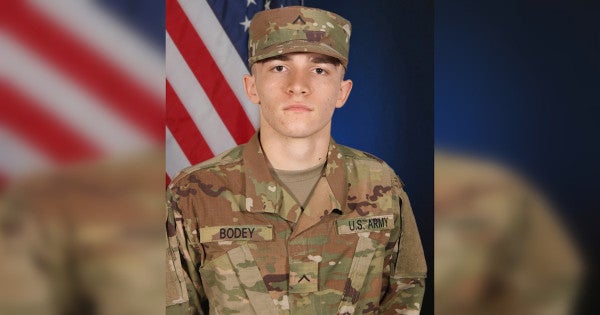 A U.S. Army soldier from Fresno, California was found dead in his barracks room in Alaska, according to the Army Times.

He was identified as Spc. Charles Michael Bodey, 20.

Bodey's body was discovered Monday at Fort Wainwright in Fairbanks by fellow soldiers, and his cause of his death was unknown, according to the report.

Bodey joined the Army in August 2017 and trained at Fort Benning in Georgia before reporting to Alaska in December 2017.

“Spc. Bodey was an essential member of Blackhawk Squadron over the past two years. He was a dedicated, loyal, and exceptionally skilled soldier, focused on performing the mission to the highest standards,” said Lt. Col. Aaron Mock, 5-1 Cavalry commander.

The incident remains under investigation.