The soldier was shot and taken to a hospital, but is now in stable condition. 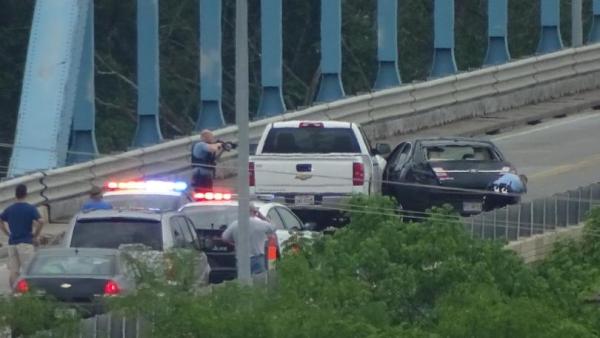 A Fort Leavenworth soldier was seriously injured Wednesday afternoon in a shooting on Centennial Bridge in Leavenworth, and a suspect was taken into custody after another soldier intervened, according to the police chief.

The shooting occurred around 11 a.m.

Leavenworth police were called to investigate a report of a person firing shots on the bridge.

It’s unclear what led up to the suspect seemingly firing shots at random on the bridge, Leavenworth Police Chief Pat Kitchens told reporters, but one person was struck— an active duty soldier who appeared to be an unintended target.

Kitchens said another soldier from Fort Leavenworth was waiting in traffic when he witnessed the shooting. The soldier intervened, he said, “by striking the shooter with his vehicle.”

The soldier who was shot was taken to a hospital, and was in serious but stable condition Wednesday afternoon.

The suspect was also taken to a hospital with serious injuries from the crash.

Two additional vehicles were struck by gunfire, Kitchens said, but no other injuries were reported.

The investigation continued Wednesday as Leavenworth detectives were processing the scene and interviewing witnesses. Kitchens said police have not yet determined why the suspect, said to be a Platte County resident, began firing shots on the bridge, but police were looking into the person’s history within the community.

“What was a very, very dangerous situation fortunately was ended quite quickly,” Kitchens said. “Again, very likely countless lives were saved by the person who intervened.”