This Soldier Rescued A Puppy From A Garbage Pit In Afghanistan. Now He’s Fighting To Bring Her Home

Zack McEntire is fighting battles on two fronts, serving in Afghanistan and finding a way to bring his beloved puppy... 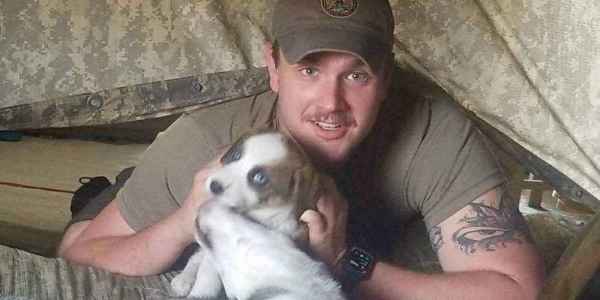 Zack McEntire is fighting battles on two fronts, serving in Afghanistan and finding a way to bring his beloved puppy home when his tour ends in about a month.

“I can see him climbing down in to the pit to rescue the dog; he’s been a dog lover all of his life,” his mother said.

Zack McEntire, 26, has always been compassionate toward dogs, rescuing strays as a child.

“He would always say, look what I found. We have to feed it,” his mother said.

Bringing Mimi home will not be easy. The cost is around $6,000 to cover the flight, quarantine and veterinary expenses.

Zack McEntire rescued Mimi from a garage pit in Afghanistan.Paws of War

McEntire is getting help raising the money from Paws of War, a nonprofit organization in Long Island, N.Y., that helps soldiers who want to return home with their dogs. Donations can be made through “Operation Saving Mimi.” Paws of war also trains service dogs for veterans with PTSD.

“Zack’s mom reached out to us,” said Robert Misseri, a co-founder of Paws of War. “Zack was concerned that he would have to leave Mimi behind, and it would have weighed heavily on his heart. Zack is a big animal lover. I said, ‘We are prepared to help you.’ ”

Misseri said that arrangements are being made to take Mimi to a quarantine shelter, where she will spend 30 days getting shots and veterinary care before flying to the United States. Paws of War has a partnership with Nowzad Dogs in Afghanistan for sheltering and providing medical care to the dogs.

“I know that I saved Mimi from that burn pit, but in a way I feel like she saved me,” McEntire said in a news release. “I can’t imagine leaving her behind. We belong together and it means a lot to me to be able to take her home to Texas with me.”

McEntire graduated from the fire academy at Weatherford College before joining the military. He also served in South Korea, Nancy McEntire said.

McEntire is stationed in a remote, mountainous area, and communications are difficult. Zack texts his mother when he can.

“Mimi is the comfort of home for Zack,” Nancy said. “He considers her his angel, and she makes him feel peaceful.”