A Fort Drum soldier is a few million dollars richer after finding a winning scratch-off ticket in Watertown, New York.... 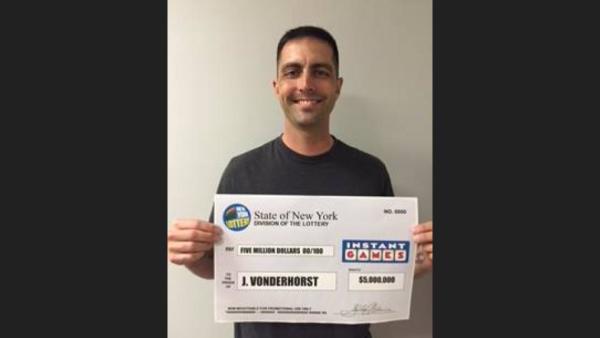 A Fort Drum soldier is a few million dollars richer after finding a winning scratch-off ticket in Watertown, New York.

Jesse Vonderhorst, 36, of Vancouver, Wash., scratched the winning Wild Bonanza Multiplier ticket at the Sunoco gas station on Factory Street, buying a $25 ticket while filling up his car.

“I like to play the higher-priced tickets,” Mr. Vonderhorst said, according to a state Gaming Commission news release. “I had played enough of the $30 tickets. The $25 ticket had recently had a local winner so I chose the Wild Bonanza Multiplier. I hadn’t played it in a while so I took a chance.”

Scratching the ticket in the parking lot, he realized he had won the $5 million prize.

“I was in shock when I saw the $5 million prize,” Mr. Vonderhorst said. “I went straight home and showed my wife. She asked me where I got the fake ticket.”

Mr. Vonderhorst took his prize in an one-time lump-sum payment, netting him $3,309,000 after required withholdings.

“The first time I played the wild ticket I won $50 and thought that was cool,” he said. “This is unreal!”

The soldier told the Gaming Commission he planned on using the money from the winning ticket to take his family on a vacation, possibly a Disney theme park.

The commission said the New York Lottery contributed $28,382,265 in aid to school districts in Jefferson County for the 2015-2016 fiscal year.