A Soldier Went To The ER For Help. He Got Disciplined Instead

Since returning from his second deployment to Afghanistan, Army Spc. Scott Miller had been through several stays at a mental... 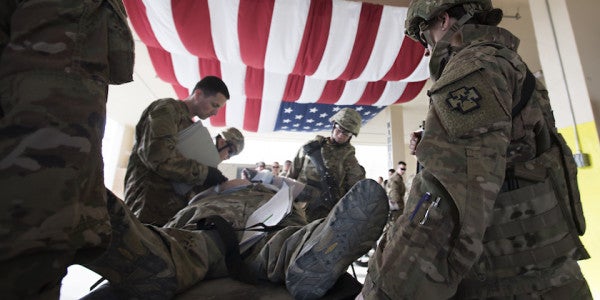 Since returning from his second deployment to Afghanistan, Army Spc. Scott Miller had been through several stays at a mental health hospital. But after Christmas, the thoughts about taking his own life were joined by new ones about killing members of his unit.

Miller, a helicopter mechanic from Bowie, Maryland, sought help in the emergency room at the hospital on his post at Fort Campbell, Ky. He says he revealed his murderous thoughts so that he could get the treatment he thought he needed.

He eventually was diagnosed with post-traumatic stress disorder. But his words triggered a criminal investigation and a lengthy disciplinary process that ended with him stripped of his rank on his way out of the service.

“I didn't threaten anybody directly,” Miller said. “I was there to try and get help, and I was honest with the behavioral health provider. I know that I'm not going to get any better if I'm not honest with my feelings and thoughts.”

The Department of Defense, trying to address the mental health needs of troops battered by years at war, has long encouraged those who are suffering to seek help — a challenge in a military culture that values strength, toughness and self-sufficiency.

Officials have run campaigns aimed at battling the stigma surrounding mental health care in the military and assuring troops that admitting they need help won't necessarily end their careers.

But Miller's case illustrates the limits to those efforts, and the challenges that confront commanders who are faced with mentally ill troops.

Neither Miller's unit nor the hospital where he sought would comment on his case. Both cited privacy rules.

“We stress to our soldiers of all ranks that seeking behavioral health care is a sign of strength,” Boyd wrote in written responses to questions. “Seeking treatment or obtaining help before negative outcomes occur is key to maintaining a healthy mental and emotional state.”

But Emily Blair, an advocate at the National Alliance on Mental Illness, said the Defense Department still has much work to do.

Lt. Col. Jay Thoman, the Army lawyer who represented Miller in his disciplinary proceedings, said he was unable to find other cases in which hospital staff aided a criminal investigation, or a commander took disciplinary action over something a soldier said to a medical provider.

“Overall the Army is very concerned about PTSD and doing the right thing and taking care of its soldiers,” Thomas said. “And when a chain of command takes the action they did in this case, it sets the Army's efforts back.”

Miller joined the military late. He'd been in the Junior Reserve Officer Training Corps at Northern High School in Owings. But after graduating in 2002, he went on to college, married and started a family. It wasn't until he lost one of two jobs he was working in 2011 that he decided to enlist.

Miller was sent to Oklahoma to train to work on the Army's Apache attack helicopters. There was much to learn, Miller said, but he didn't find the material too difficult, and he was excited to get one of his first-choice assignments: with an aviation brigade attached to the famed 101st Airborne Division.

Days consisted of workouts in the morning followed by hours working on the helicopters — figuring out what was wrong with the controls, or electronics or weapons systems.

“I like problem-solving,” Miller said. “I had to figure out exactly what component was wrong or where something was broke, and fix it from there.”

Miller's mental health problems began in 2012, when he deployed to a remote forward base in Afghanistan known as “Rocket City.”

“The flight lines where all the helicopters were and our living area were the main target of all the [Taliban] rocket fire,” he said.

One incident in particular stuck with Miller. Just before he and his unit were due to return home, he said, a rocket struck and killed two officers from the unit that was arriving to replace them.

Miller said he still has the pamphlet from the memorial service at the base.

“I can't believe I made it nine months,” he said. “They didn't even make it a week.”

Miller said it was difficult to readjust to life in the United States. He had trouble sleeping, and was wary around crowds. All he wanted to do was sit around the house.

Miller's wife intervened, he said, and he went into counseling. It helped.

Then, in 2015, he was deployed back to Afghanistan.

Felicia Miller said her husband came back from that second deployment a different person.

His time overseas had been cut short. He ran into medical issues, and the Army sent him home after less than two weeks.

In October, Miller went into in-patient treatment at a civilian facility near Fort Campbell for the first time. He was in an and of the hospital several times throughout the rest of the year until in late December when something changed: the thoughts he had had about killing himself were joined by thoughts of harming other people.

On Dec. 29, Miller told his wife how she was feeling. She quickly found a babysitter and they began the 40-minute drive to the hospital.

Felicia Miller remembers talking to her husband all the way, making sure he was focused and trying to keep flashbacks at bay.

At the hospital, Scott Miller told a licensed clinical social worker how he was feeling. She warned him that if he continued, she would have to report him if he continued. Miller said he pressed on.

“I just described what I was thinking how I was feeling,” he said. “I was just being honest because I knew that my thoughts and feelings weren't correct.”

In a statement to police that night, the social worker said Miller threatened to hurt three members of his unit.

“I would hit them with a steel pipe,” she said he told her.

The hospital would not make the social worker available to comment.

Boyd, the hospital spokeswoman, declined to comment on the social worker's actions, but said the law requires health care providers to warn law enforcement and potential victims when threats are made.

Boyd said the legal responsibility includes cooperating with police. But Thoman, Miller's lawyer, questioned whether the social worker had to give a sworn statement.

That statement formed the basis of the disciplinary case against Miller.

After the conversation with the social worker, he was admitted for more in-patient treatment. When he was released in January, he was served legal papers.

Miller was transferred out of his company. In May, his new captain summoned him to his office to finalize his punishment. The captain found Miller guilty of violating military law and reduced his rank from specialist to private first class.

Miller said he was told that his commanders decided they needed to make an example out of him to deter other people from behaving like he did.

But he thinks all his case would serve to do is put other soldiers off getting mental health treatment.

“They try to put out that there's no stigma about it,” Miller said. “But there is. It's still there.”