The old mantra that “sleep is for the weak” has no place in the modern military. But health professionals are... 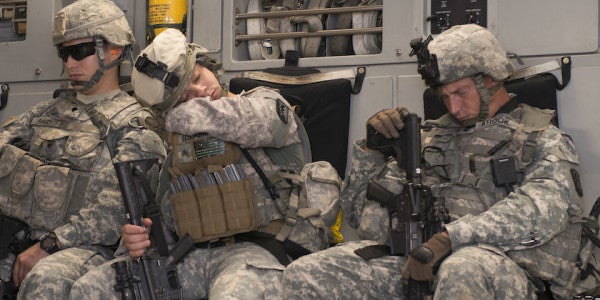 The old mantra that “sleep is for the weak” has no place in the modern military.

But health professionals are still butting against cultural and operational hurdles as they discover more connections between sleep disorders and mental and physical health issues.

Stephanie Brooks Holliday outlined some of those hurdles and the dangers of sleep disorders among troops during a presentation Friday as part of the annual Forward March symposium.

The two-day symposium is aimed at bringing community and health care leaders together to address issues affecting military families.

Holliday, an associate behavioral scientist at the RAND Corp., said sleep issues are not unique to the military. But service members do appear to be at a higher risk of having sleep problems.

“Sleep problems are prevalent, debilitating and persistent among service members,” she said.

Related: Sleep Disorders Among Troops Are More Damaging Than We Realize »

Citing a study funded by the Defense Centers of Excellence for Psychological health and Traumatic Brain Injury and the Army Medical Department, Holliday said only about a third of troops report getting seven or more hours of sleep each night.

The rest receive less than the recommended seven to eight hours, she said, with 31% reporting six hours each night and 31% reporting five or fewer hours a night.

Outside of the military, similar studies have found less than 8% of adults sleep five or fewer hours a day.

Also, about half of service members report poor sleep quality, Holliday said, while just under a third of the larger adult population makes similar claims.

And a third of troops report they are fatigued at least three to four days each week.

That's disturbing, she said, because of the critical role sleep plays in the restoration of body and mind.

“Not getting enough sleep is a really serious issue,” Holliday said. “Sleep is critical.”

Much of the problem can be traced to the military lifestyle.

Holliday noted poor sleep environments, especially during training or on deployments, and long hours as contributing factors in the military's sleep issues.

But there's also the thinking that staying up late is a sign of strength or stamina, she said.

Service members report sleep issues regardless of their deployment history. And those issues often remain with them after they've left military service.

Holiday said that, too often, military leaders don't consider the ramifications of lack of sleep. And many troops enter a dangerous cycle of using energy drinks and caffeine to stay awake and medication to sleep.

“The culture of the military is really not always conducive to sleep,” Holliday said.

Army leaders have taken note of the connections between sleep and health.

Speaking during the first day of Forward March on Thursday, Command Sgt. Maj. Scott Schroeder of U.S. Army Forces Command said in-depth analyses of soldiers who commit suicide shows a clear connection between lack of sleep and behavioral problems that could lead a soldier to take his own life.

The problems range from young soldiers to senior leaders.

Schroeder said a soldier who recently killed himself had been diagnosed with insomnia.

Another, whom he called a “very senior officer,” was also not getting enough sleep.

“He had not slept for two years,” Schroeder said.

Holliday said the Army is leading the way when it comes to changing the way the military thinks about sleep.

She praised the Army's Performance Triad, a health program focused on improving sleep, exercise and nutrition, and said the service is taking steps in the right direction.

Holliday also said the military was offering more treatments to combat sleep disorders, including various therapies, medication and alternative treatments, such as yoga and meditation.

But, she said, there is still a lack of understanding among some troops and their leaders.

“The stigma is still there,” Holliday said. “Sleep is viewed as a luxury, rather than a necessity.”