“We are separated physically in order to fight this battle, but we will come together again.” 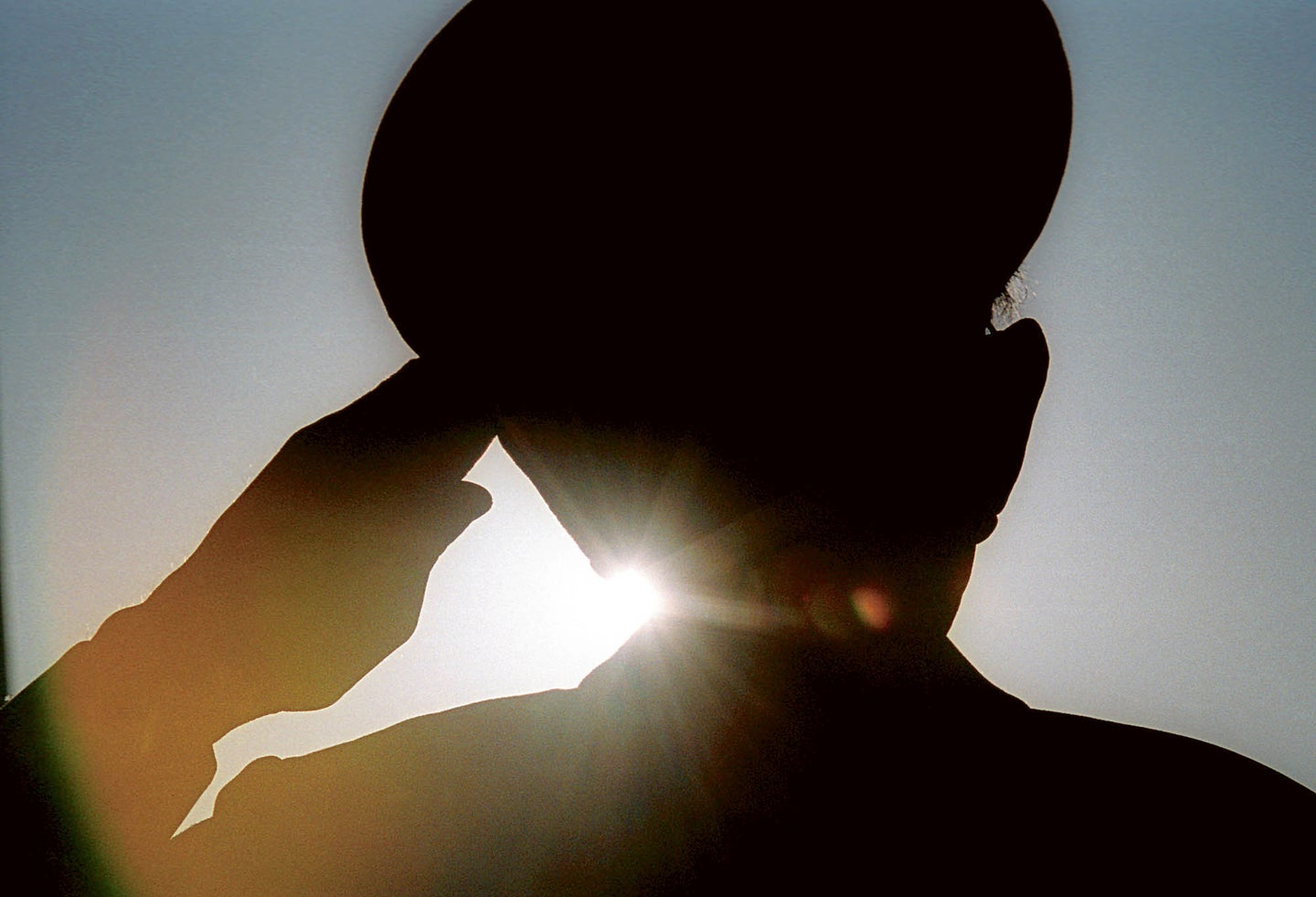 When he came face to face 74 years ago with Baldur von Schirach, the organizer of the Hitler Youth movement, Emilio “Leo” DiPalma was, as he put it, “just a kid.” A kid from Springfield, Massachusetts.

The 19-year-old son of Italian immigrants was standing guard in Courtroom 600 at the Palace of Justice in Nuremberg, Germany, when Von Schirach, fresh from a confrontation with a prosecutor at the war crimes trials, remarked to DiPalma during a recess, “Our Hitler Youth was nothing more than your Boy Scouts.”

DiPalma, who had seen combat with the Army’s 79th Infantry Division as the Americans crossed from Belgium into Germany in 1945 and chased the Nazis to defeat at the end of World War II, didn’t miss a beat: “I fought the Hitler Youth,” he remembered telling von Schirach. “They were vicious. Our Boy Scouts weren’t taught to use weapons.”

From that point on, von Schirach never again looked his young guard in the eye, according to DiPalma’s daughter, Emily Aho. “My dad really thought von Schirach believed him and took to heart what he said.”

Von Schirach is said to have indeed had a change of heart in the course of his trial, admitting, “I put my morals to the side when, out of misplaced faith in the Führer, I took part in this action. I did it. I cannot undo it.” He was sentenced on Oct. 1, 1946 to 20 years in prison for crimes against humanity, was released in 1966 and would live out his days in a life of seclusion, dying eight years later at the age of 67.

After his wartime duty, Emilio Joseph DiPalma returned home to Western Massachusetts to marry his beloved wife, Louise. Together, they raised a family of four daughters. He had a long career as a hoisting engineer in construction and was a volunteer firefighter in East Longmeadow.

On April 8, one week after testing positive for the COVID-19 coronavirus, DiPalma died at the Soldiers’ Home in Holyoke. He was 93 years old. He is among more than 50 residents of the Soldiers’ Home who have died since the virus invaded in early March, most of them from the effects of COVID-19.

Many of the dead were veterans of World War II, but the virus over the past weeks at the Soldiers’ Home has also taken the lives of veterans of Korea and Vietnam as well as those who served our country during times of peace. No generation has proven immune to COVID-19.

Army veteran Francis Foley, of Chicopee, 82, who died on April 17, was a 50-year union carpenter who “above all…enjoyed spending time with his family and many friends.”

Michael J. Laviolette, of West Springfield, served as a medic with the Army National Guard and was 67 when he died on April 1. Retired since 2014, Laviolette “was a devout Catholic and always went out of his way to help others.”

Theodore A. “Ted” Kapinos, 91, of Hadley, served as a military police officer with the Army during the Korean War and went on to careers with the Massachusetts State Police and as director of security at the Springfield Library and Museum Association. He was a man who “lived life with gusto through his sense of humor and worldly philosophies.”

Four days shy of turning 100, James H. Sullivan lost his battle with COVID-19 on April 13. Three years ago, he was among a small group of the home’s residents who visited Springfield’s Union Station at the invitation of U.S. Rep. Richard E. Neal to see the place they passed through when they went off to war.

It was there that Mr. Sullivan and I met. He reveled as he recalled heading off to duty with the Army, remembering the train ride from Northampton south through Springfield, bound for basic training. A recipient of the Bronze Star, Sullivan saw duty in the Pacific as a forward observer.

Sullivan was a contemporary of my father, who died in 1991, as they had grown up in the same working-class, largely Irish neighborhood off Prospect Street in Northampton. He was in the words of one of my close friends who knew him better than me, “a consummate gentleman, unfailingly so.”

The obituaries which flow in each day to The Republican share words which most fully describe the toll being taken by the virus at the Soldiers’ Home. Each is a patriot, but the chapters of their lives go far beyond their military service as they lived and worked among us, contributing to our communities all across Western Massachusetts.

For their families, the grief of their loss is accentuated by not having been able to be with their loved ones as they faced what truly proved a fight of a lifetime. They must grieve against a backdrop in multiple inquiries into how the virus spread through the home and how the response was handled by those in charge.

“In a sense it’s another world war, but this time we can’t see the foe,” Leo DiPalma’s daughter wrote to me in an email soon after her father’s passing. “We are separated physically in order to fight this battle, but we will come together again.”

She had reached out to share a clipping from the June 1, 1946 edition of the Springfield Daily News: “Local GI Guard Nazi Big-Wigs,” to let us know how much the newspaper had meant to her family more than seven decades ago. “His parents (my grandparents) loved that photo because at that time they had no idea of where he was stationed. (For) Italian immigrants living in Springfield, it was a relief to see him at the trials and they were proud,” she wrote.

Like the children of many a veteran, Aho had long known little about what her father had done in the war, other than “he was at some big trial.” Their father-daughter relationship took an entirely different turn when they visited Germany together in 2000 and wound up one afternoon in Courtroom 600 in Nuremberg.

“It was then that I felt like I came full circle with my father,” she says. “I learned about him as a person. In Germany, I saw him as a 19-year-old man during the trials, and I saw what he experienced. He completely changed, talking about his experiences and showing me things.”

Aho, who has authored several children’s books, teamed with her father to publish “Just A Kid” in 2002, his memoirs of the Nuremberg Trials. It opened the floodgates for DiPalma to break his long silence, conducting interviews and sharing his recollections with museums and audiences around the world.

As her path of grief unfolds, Aho draws comfort from videos her father recorded for the Robert H. Jackson Center in which he shared his recollections of Nuremberg. (Jackson was the chief U.S. prosecutor at Nuremberg and went on to serve as a Supreme Court judge). Seeing her dad, hearing his voice reminds her of the man he was, not of the disease that took him, she says.