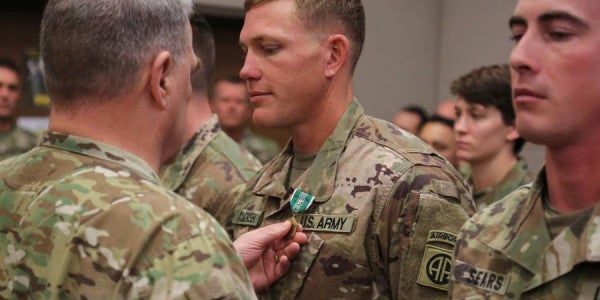 “I see the trees on the side just like blow forward,” the Cincinnati native said, recalling the incident during an interview here last week. “It was crazy.”

Eight vehicles back from Sears, who was in the lead vehicle of the route-clearance platoon’s formation, Spc. Garrett “Doc” Young, the platoon medic, heard Sears radio that the van they were passing was loaded down with bags. Then Garrett saw the flash and heard the boom.

“It was so loud and it was so bright, I thought that was it,” he said.

But it wasn’t. It was like a starter’s pistol, and soon panic and training kicked in as the soldiers raced to secure the area and prepare casualties for evacuation. In 32 minutes, the wounded were already being treated at a field hospital, a timeline their leaders say saved two American lives.

During a ceremony at Bagram on Dec. 20, Army Chief of Staff Gen. Mark A. Milley and Sgt. Maj. of the Army Dan Dailey awarded Army Commendation Medals with V devices to Sears, Young and a third soldier, Sgt. Mark Andrisek, for their actions during the Nov. 13 incident in Kandahar province.

“It’s really recognizing the fact that everyone’s alive because of them,” said Capt. Danielle Villanueva, the soldiers’ company commander. “It’s an incredibly proud moment for us as a command.”

Sears’ gunner had first spotted the van and made it stop, but Sears couldn’t see it was loaded with woven plastic bags — the type that typically hold about 50 pounds of fruit, fertilizer or explosives — until they got alongside it. As they passed, the driver looked up at him, deadpan, as they all do, he said.

Then, repeating a pattern that’s developed in Kandahar this fall, the man blew himself up. He had seemed to know, as Sears figured many insurgents had learned, that the convoy would simply drive past his vehicle with little hassle.

“That’s the way we had to play the game,” Sears said. “You don’t really want to impede on these people’s lives because the idea’s to be here to help them.”

Coalition convoys try to avoid disrupting the flow of everyday traffic too much, Sears said. For all they know, the cars and vans passing them or weaving into their convoys are harmless: farmers taking goods to market, families going to visit sick loved ones.

It’s a vulnerability the insurgents have begun exploiting to deadly effect this year, killing three coalition troops in suicide car-bombing attacks in Kandahar province and wounding at least 10 others.

“When the enemy shoots, it’s easier to kill them back,” said Sears, who’d been in firefights on a previous deployment that hadn’t claimed casualties. Suicide car bombings are different, he said. “It’s pretty much a one-way ticket.”

But such bombings “are they only way they can get us,” Sears said. Route-clearing platoons have been “finding everything,” he said, meaning hidden or buried improvised explosive devices.

Pavlyuk credited his troops’ quick reaction to their adaptability on the battlefield and to drills units had conducted to prepare for such incidents after a fatal attack on a U.S. convoy in August.

In that attack, a man who had been pretending to work under the hood of his vehicle gave chase to a U.S. convoy after it passed and detonated his car bomb when he got close, Sears said. The blast killed two 82nd Airborne Division paratroopers and wounded four others.

On Sept. 15, it happened again. This time, two Afghans in a truck that appeared to be carrying fruit detonated their hidden explosive cargo, killing a Romanian soldier and wounding at least one more nearly fatally, the American soldiers said.

“He’s a full-blooded American,” Young said, referring to the amount of U.S. blood used in transfusions to save the second Romanian soldier.

In the November incident, the powerful blast from the Afghan’s vehicle spun the third vehicle in the U.S. convoy, a 20-ton RG-33 armored vehicle, flipping it off the side of the narrow road, 20 feet down into a ravine onto its roof.

Luckily, the gun turret was remotely operated, Sears said. A gunner standing in it likely would have died.

The RG-33’s hood, which took six soldiers to carry, was blown nearly 300 meters away in a field. The blast also knocked the helmets off both the RG-33’s driver and the platoon leader in the front passenger seat.

When Sears dismounted and reached the scene, Young was already treating Spc. Kimkirvie Mapaye, the driver. He was “pretty messed up,” with severe burns on his arms, face and neck. Two other soldiers, though “walking wounded,” were helping out.

Someone shouted that a soldier was still inside the truck. When Sears climbed in, he could see his platoon leader’s legs on the roof, but he couldn’t pull 1st Lt. Victor Prato out. To make matters worse, the truck was on fire.

“There was three separate little fires going — or not little,” Sears said. “The ground was soaked .”

Andrisek, of Victorville, Calif., coordinated efforts to put out the fires, set up security and sweep a helicopter landing zone for secondary explosive devices.

“Doc had pretty much all the help he needed,” Andrisek said. “Instead of like getting too zoned in on … the casualties, you can’t forget where you’re at, so I started emplacing security … started like multitasking.”

Sears jumped out to find Prato’s upper body was pinned outside the vehicle, under the roof of the roughly 15-ton hull, but the platoon leader was still conscious and talking.

Mechanics quickly hooked up the recovery vehicle’s boom and began carefully raising the damaged truck body — a critical moment, Andrisek said, as it could have shifted and crushed Prato further.

Soon, with Prato and Mapaye on litters, wrapped in blankets and far from the wreckage alongside an injured Afghan translator and the two lightly wounded paratroopers, medevac helicopters arrived to whisk them away. Prato and Mapaye were eventually transferred stateside for recovery.

Sears, Andrisek and Young said they had mixed emotions about receiving commendation medals.

“Things happened. We reacted,” Sears said. “It’s not something you really feel should be awarded.”

The bigger reward, Andrisek said, was that no one died.

“That’s what we take away at the end of the day,” Young said.

They were grateful, though, for the chance to meet with Milley and Dailey and with Lt. Gen. Todd Semonite, commanding general of the Army Corps of Engineers. Dailey also pinned a Combat Medical Badge on Young.

But, as the trio waited for a flight back to Kandahar later that day, their minds were on their fellow troops on duty in the southern province and the work they do.

“We’ve got a mission tomorrow,” Sears said. “It never stops.”