These Soldiers Put The Marine Scout Sniper Course To Shame

Two soldiers recently outshot their Marine classmates in one of the Corps' most challenging schools — the Marine Scout Sniper Course. 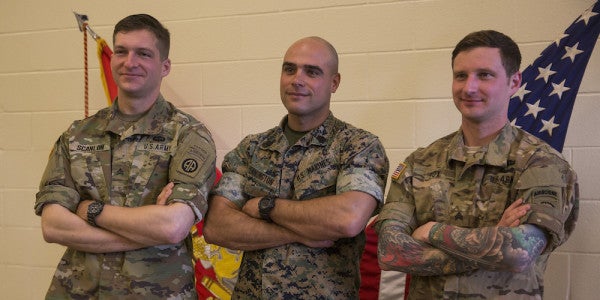 Editor's Note: This article by Matthew Cox originally appeared on Military.com, the premier source of information for the military and veteran community.

Two soldiers recently outshot their Marine classmates in one of the Corps' most challenging schools — the Marine Scout Sniper Course.

Sgts. Clinton Scanlon and Bryce Fox, of the 82nd Airborne Division at Fort Bragg, North Carolina, took the “high shooter” and “high stalker” awards upon graduating from Scout Sniper Course 1-18 on April 13 at Camp Geiger on Marine Corps Air Station New River, according to a release from the Defense Visual Information Distribution Service.

The graduation occurred more than a month ago, but when stories about it began popping up on the Web this week, Military.com couldn't resist. The Marine Scout Sniper Course is known for having a high wash-out rate, so any time soldiers outperform Marines in the respected course, it's worth mentioning in the spirit of inter-service rivalry.

“Sgt. [Clinton] Scanlon and Sgt. [Bryce] Fox were both previous Army sniper graduates, and we had an expectation that they would at least be familiar with the skills that we teach in this course,” Marine Staff Sgt. Craig Chandler, acting chief instructor at SSC 1-18, said in the release.

“They were both extremely easy to work with, and they shared their knowledge with the other students in the class who aren't as familiar,” he said.

Both Scanlon and Fox, who are assigned to 2nd Battalion, 505th Parachute Infantry Regiment, had to get used to shooting the Marine M40A6 sniper rifle instead of the Army's M2010 sniper rifle, Chandler said.

The transition didn't prevent Scanlon from taking the “high shooter” award for the best overall score on the rifle ranges, according to the release.

“We did go through U.S. Army Sniper School, so I think we definitely had a leg up on some of the fresh Marines right out of the fleet,” Scanlon said. “It was clear that everyone here knew what they were doing, and the instructors were able to get the guys here shooting very well.”

“Stalking is when you put grass, leaves and any natural vegetation around you on your body and then you sneak up using individual movement techniques,” Fox said.

“You take a shot without being seen, and then you shoot again. The do a walking sequence to try and lock on you. If you don't get found, you pass,” he said.

Scanlon said he was impressed by the course and hoped he could try other Marine sniper training.

“It was a great course,” he said. “After this, I'd like to attend one of the advanced Marine Corps sniper courses, but for now I'm going to go back to my unit to get my guys trained up on the things I learned here.”