For his efforts, Riffe was awarded the Soldier's Medal for heroism on March 22 by U.S. Rep. Richard Hudson during a ceremony at Fort Bragg. 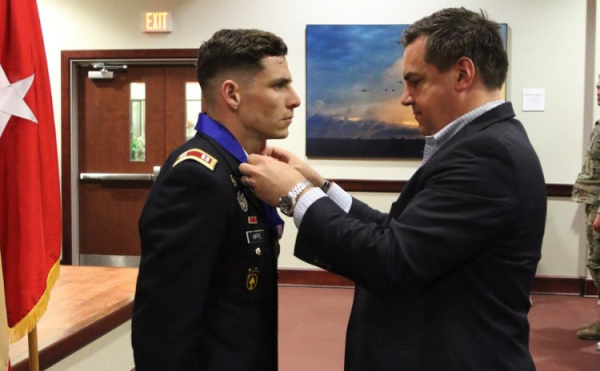 Capt. Jacob Riffe was traveling on Interstate 95 last April when he noticed a vehicle swerve and crash into a fence.

Riffe, a soldier with the 264th Combat Sustainment Support Battalion, 3rd Expeditionary Sustainment Command, said his training kicked in as he pulled his vehicle over and rushed to help the occupants.

For his efforts, Riffe was awarded the Soldier's Medal for heroism on March 22 by U.S. Rep. Richard Hudson during a ceremony at Fort Bragg.

The medal is the Army's highest award for heroism outside of combat.

Riffe was on his way back to Fayetteville with his then 5-year-old son on April 13 after attending a captain's career course at Fort Lee, Virginia.

It was about 6:15 p.m. and he was a few miles from Fayetteville near exit 58 when he noticed the wreck.

He said he would not have seen the crash if he had not been delayed a bit by a stop.

“I actually should have been to Fayetteville already at the time,” Riffe said.

Riffe said he stopped at a gas station to check out the 18-wheelers with his son, went inside and looked around for 20 minutes.

When he saw the crash, he stopped his vehicle and ran toward the scene, where he noticed a fire in the engine compartment and saw that nearby shrubs and branches were catching fire.

He didn't see anyone getting out of the vehicle and was concerned about its occupants.

Riffe, who has an explosive ordnance disposal background, said he was concerned about the fire spreading to the gas tank, too.

“Once the tire started popping and hissing and (fire) taking over the shrubbery around it, I was like OK we got to get out of this place,” Riffe said.

Riffe, an Augusta, Georgia, native, enlisted in the Reserves in 2007 after high school, deployed to Afghanistan, returned in 2012 and was commissioned in 2014.

It was his training and desire to help that kicked in when he saw the wreck.

Riffe has combat lifesaver and tactical combat casualty care training. He also keeps a medical bag in his vehicle. Riffe said he checked the vitals of the driver and the passenger to make sure they were OK.

“Luckily other than just being completely terrified of what happened, they had some neck pains and some normal bumps and bruises,” he said. “They were very fortunate.”

Riffe said he sat with the driver and passenger until emergency responders arrived, making sure they were OK and praying with them.

He said he later learned that the occupants were headed to New Jersey and that a medication the woman caregiver took caused her to lose consciousness and lose control of the vehicle.

“There is no doubt that had (Riffe) not acted as quickly and selflessly as he did, the two occupants of the vehicle would have not survived the incident,” a program for his medal states.

Hudson said he considered it an honor to join service members and their families to honor Riffe, a soldier who he's gotten to know over the years.

“When I found out he saved two people from a burning car, I knew it was true,” Hudson said. “Some could say he was simply in the right place at the right time. But we all know God put him there — not anyone else — because he knew he was the right person to answer the call.”

Riffe said he wasn't thinking about recognition when he stopped to help.

“It's to help your fellow man — they could have been my grandparents,” he said of what was going through his mind that day.