Al Shabaab, an Islamist militant group, has launched a string of complex attacks in the past two months on Somali security forces, African Union peacekeepers and — on Monday — European Union and U.S. forces 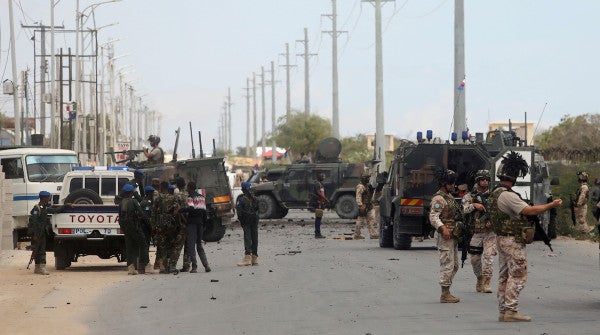 NAIROBI (Reuters) – Cameras picked up the two white trucks carrying bombs and fighters through the bush towards Somalia's most secure military base, home to U.S. special forces, foreign trainers and the Somali special forces they mentor.

The alarm was raised. By the time the al Shabaab insurgents were a few hundred yards from the perimeter of Baledogle military airfield on Monday, Danaab – Somalia's elite commandos – were waiting, their trainers beside them.

One truck bomb detonated far from the perimeter fence. Eight attackers in uniforms jumped from the other, but Danaab soldiers gunned them down almost immediately, said a Somali security official.

Then the second truck was hit by a U.S. air strike. The explosion was captured on video footage provided to Reuters by two security experts.

Al Shabaab, an Islamist militant group, has launched a string of complex attacks in the past two months on Somali security forces, African Union peacekeepers and — on Monday — European Union and U.S. forces.

But local and international security officials dismissed Monday's attack on Baledogle – which followed a separate bomb attack on an Italian military convoy – as a high-profile stunt rather than a serious assault.

“This is a publicity stunt,” said the Somali security official who provided details of the attack on condition of anonymity. “Baledogle military airfield is very highly defended. It's not easy (to attack). You can always try, but you will not succeed.”

The attacks are unlikely to influence the commitment to training Somalia forces or a review of the U.S. military presence in Africa as it focuses attention on China and Russia, a U.S. defense official said.

There are usually between 6,000 and 7,000 U.S. troops in Africa, with about 6,500 there currently, the official said. Potential troop reductions do not include Somalia, now home to between 650 and 800 U.S. troops. The review is expected to be completed this month and will then go to the secretary of defense and chairman of the joint chiefs.

Despite persistent attacks, Somalia's international partners are more concerned with rising political tensions between the federal government and member states and reducing corruption among the Somali troops they are training to take over security responsibility from an African Union peacekeeping force.

Partners have struggled to cut graft in the Somali army by building a payroll system based on biometric data. In December 2017, the U.S. government suspended aid including food, fuel and stipends for around 18 months to units not directly supervised until accountability was strengthened.

The attacks came as Somali soldiers and African Union forces have been taking over villages in the Lower Shabelle region around the capital, Mogadishu. Some have been under insurgent control for 10 years, a security expert told Reuters. In response, al Shabaab is launching attacks on bases from the countryside.

Three Somalia-based security experts described Monday's attack as more of a bid to grab headlines than a concerted attack on Baledogle.

Ten fighters was far too few to attempt a serious assault on the heavily defended military base, said the Somali security source. The base is home to U.S. special forces, Somalia's Danaab and Washington D.C.-based Bancroft Global, which has a U.S. government contract to train Danaab. The Somali National News agency said the attack was over in 10 minutes.

“I don't think even they thought they would succeed,” the Somali official said. “But there are a lot of military gains happening in Lower Shabelle and across the country… This is a way to show 'we are still here; we are still alive,' to get attention.”

Photos provided to Reuters by two other Somalia-based security experts show a number of men dressed in camouflage uniforms sprawled in the dust or piled in the back of a pickup truck, their injuries consistent with gunshot wounds.

A pile of weapons recovered from the attackers included grenades, rocket-propelled grenades, light machine guns, Kalashnikov-style rifles and belt loads of ammunition. The attackers had also packed food supplies, including milk and apples.

After the attack, al Shabaab put out a statement saying they had killed 100 foreign soldiers and destroyed five aircraft, including drones and helicopters. They provided no evidence to support their claims.

As al Shabaab attacks continue, Somalia's internal politics also are causing concern. There is deepening suspicion between states and the presidency, a long-running spat partly grounded in rivalries for access to international security funds and worsened by the federal government's perceived interference in regional elections.

In December, the government imprisoned Muktar Robow, a popular former al Shabaab commander who had defected and ran for the leadership in South West state. The arrest sparked protests, and when the United Nations protested over the use of deadly force to quell the demonstrations, Somalia expelled its envoy.

In August, Ahmed Madobe, leader of the southern Jubbaland region, was re-elected despite federal opposition. Neighboring Kenya, involved in a spat over oil rights with Somalia, supported Madobe.

The bad blood between the government and regions means local security forces do not share intelligence with federal forces, one regional intelligence official told Reuters.

Local forces are often better-equipped than federal soldiers posted to the regions and often more successful at fighting al Shabaab in their home area, although the Danaab units – better- paid and better-trained than regular soldiers – are the elite.