Col. Roy Knight's remains were returned to the same airport where his 5-year-old son waved goodbye to him decades ago. On Thursday, his son flew his father home 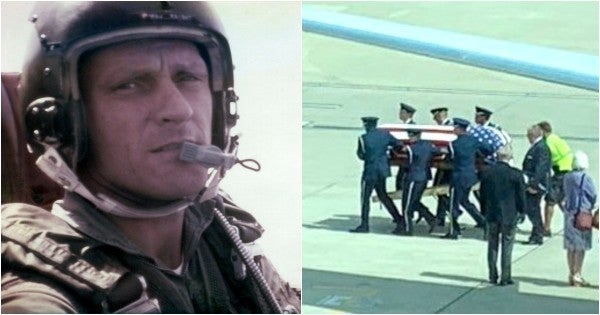 More than five decades ago, the son of Air Force Col. Roy Knight waved goodbye to his father as he headed off to war.

On Thursday, that same son flew his father's remains back to the very same airport

The emotional scene was first reported on Twitter by Jackson Proskow, who was at the Dallas Love Airport waiting for a flight when an announcement over the intercom informed travelers that the pilot flying the South West Airlines plane that brought Knight's remains home on Aug. 8, was one of his two sons, Bryan Knight, the airline confirmed to Task & Purpose.

Our incoming plane is carrying the remains of an American pilot shot down over Vietnam in 1967. His remains were only recently recovered and identified and brought back to the US.

Col. Knight's A-1E Skyraider was hit by anti-aircraft fire during a mission over northern Laos on May 19, 1967, and subsequently crashed. According to a Department of Defense statement, after Knight's aircraft was hit, the other two Skyraiders on the mission reported that no parachute was observed, and that “no beeper signals were heard.” Though a search and rescue mission was mounted, the intensity of enemy fire forced the troops to withdraw.

In September 1974, after being deemed missing for seven years, he was declared deceased.

Decades later, following a joint investigation of the crash site by teams from the United States and Lao People's Democratic Republic, Knight's remains were positively identified on June 4, 2019, according to the June 13, Department of Defense statement.

The entire terminal has come to watch this arrival. pic.twitter.com/HW3yAHEXBf

“They were able to make a complete identification of my father based on dental records, and it doesn't get any better than that,” Roy Knight, the eldest of Knight's two sons told the Weatherford Democrat.

“Since I was 11 years old my identity has been the son of this missing man, so the fact that we're ending this journey is kind of hard to describe,” he continued. “You have these competing emotions — you're happy this is resolved, but there's that uncomfortable feeling of change and coming to grips with reality, then there's also immense, intense sadness that comes whenever you contemplate the loss of someone that's important to you. It has been a little more difficult to deal with in that regard and the fact is, reliving a lot of that and unpacking it all and dealing with it again does have an emotional aspect to it.”

On Aug. 10, Knight will be laid to rest at Holder's Chapel United Methodist Church in Weatherford Texas where he will recieve full military honors, according to his obituary.