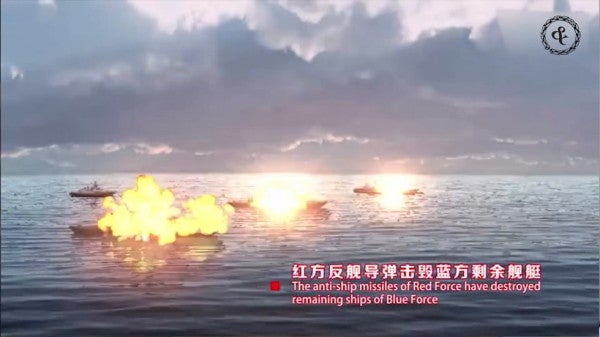 The Chinese military reportedly began testing these weapons over the weekend, as a week-long drill
kicked off in the disputed waterway. CNBC reports that Chinese forces test-fired anti-ship ballistic missiles (ASBMs), which could include systems like the DF-21D or DF-26.

The testing of ASBMs would be an important first for the South China Sea and a significant step forward as China seeks to strengthen its anti-access, area-denial capabilities, although some expert observers suspect China may have been testing anti-ship cruise missiles.

For ballistic-missile tests, Chinese authorities typically issue Notices to Airmen (NOTAM) identifying “temporary danger areas,” Ankit Panda, senior editor at The Diplomat,
explained. Such a NOTAM was issued for the period between June 30 and July 1, marking off two locations in the South China Sea.

Beijing previously moved land-based anti-ship cruise missiles (ASCMs), such as the YJ-62 and YJ-12B, to Chinese-occupied territories in the region, a move the US condemned.

“China's militarization of artificial features in the South China Sea includes the deployment of anti-ship missiles, surface-to-air missiles, electronic jammers, and more recently, the landing of bomber aircraft,” Jim Mattis, the former secretary of defense, explained last year. “Despite China's claims to the contrary, the placement of these weapons systems is tied directly to military use for the purposes of intimidation and coercion.”

Range limits require ASCMs be on islands in the South China Sea in order to reach surrounding waterways. Longer-range ASBMs could be fired from the Chinese mainland, allowing for more robust defenses around the batteries.

China argues that relevant deployments are a necessary response to aggressive US behavior.

US officials told CNBC that while the US Navy has ships in the South China Sea, the missile testing did not endanger any US ship. The testing was, however, characterized as “concerning.”

Locked in competition with great power rivals, the US is looking more closely at the development of anti-ship capabilities as it prepares to counter near-peer threats, such as the massive Chinese navy.

Both the Army and the Marine Corps, for example, are looking at long-range artillery and shore-based anti-ship missile batteries to control the maritime space from land.

“You can imagine a scenario where the Navy feels that it cannot get into the South China Sea because of Chinese naval vessels,” Mark Esper, the former secretary of the Army who is now acting secretary of defense,
explained earlier this year.

“We can, from a fixed location, on an island or some other place, engage enemy targets, naval targets, at great distances and maintain our standoff and yet open the door, if you will, for naval assets or Marine assets,” Esper said.