China Is Threatening Foreign Vessels Near Its Island Fortresses, And The US Military Isn’t Changing A Thing

The U.S. Navy and regional allies have reportedly noticed an increase in Chinese radio queries to foreign ships and planes... 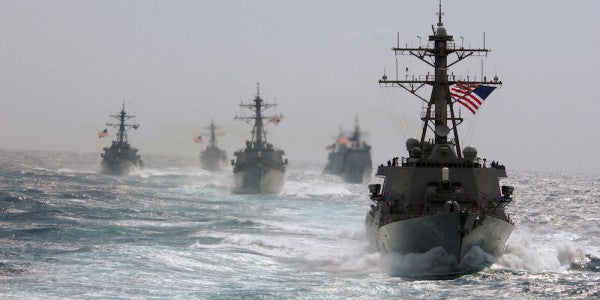 The U.S. Navy and regional allies have reportedly noticed an increase in Chinese radio queries to foreign ships and planes operating in the South China Sea — some said to be less than friendly, and others actually threatening.

“Philippine military aircraft, I am warning you again, leave immediately or you will pay the possible consequences,” the report said the Chinese forces threatened soon after, according to the AP.

In the latter half of last year, Philippine military aircraft patrolling near contested territories received at least 46 Chinese radio warnings, the government report says, according to the AP. While these warnings have traditionally been delivered by Chinese coast guard units, they're now thought to be broadcast by personnel stationed at military outposts in the South China Sea, the news agency reported.

“Our ships and aircraft have observed an increase in radio queries that appear to originate from new land-based facilities in the South China Sea,” Cmdr. Clay Doss, a representative for the U.S. 7th Fleet, told the AP.

“These communications do not affect our operations,” he added, noting that when communications with foreign militaries are unprofessional, “those issues are addressed by appropriate diplomatic and military channels.”

The Philippine military tends to carry on with its activities. “They do that because of their claim to that area, and we have a standard response and proceed with what we're doing,” Philippine air force chief Lt. Gen. Galileo Gerard Rio Kintanar Jr. told the AP.

Though an international arbitration tribunal sought to discredit China's claims to the South China Sea two years ago, China has continued to strengthen its position in the flashpoint region.

In recent months, China has deployed various defense systems — such as jamming technology, surface-to-air missiles, anti-ship ballistic missiles, and even heavy bombers — to the South China Sea, leading U.S. Secretary of Defense Jim Mattis last month to accuse China of “intimidation and coercion” in the waterway.

Beijing, however, argues that it has a right to defend its sovereign territory, especially considering the increased frequency of US Navy freedom-of-navigation operations in the area; it has conducted more than half a dozen since the start of the Trump administration.

Despite Chinese warnings and objections, the U.S. military has repeatedly made clear that it will maintain an active military presence in the South China Sea.

Related: China Just Sent A Major Warning To The US In The South China Sea »

The U.S. military has also expressed confidence in its ability to deal with China's military outposts in the region should the situation escalate.

“The United States military has had a lot of experience in the Western Pacific taking down small islands,” Lt. Gen. Kenneth McKenzie, the director of the Joint Staff, told reporters in May, adding: “It's just a fact.”

The US earlier this year disinvited China's People's Liberation Army Navy from participating in this year's iteration of the multilateral Rim of the Pacific maritime exercises, citing what it characterized as alarming Chinese activities in the South China Sea. The Philippines has at least twice raised the issue of radio warnings with Beijing, the AP reported Tuesday.

7th fleet
analysis
artificial islands
How The Other Half Fights
news