Joint U.S.-South Korean military exercises scheduled for next month are going ahead, a top Seoul official said Saturday, despite a threat by North Korea to boycott working-level talks with Washington and possibly restart nuclear and longer-range missile tests. 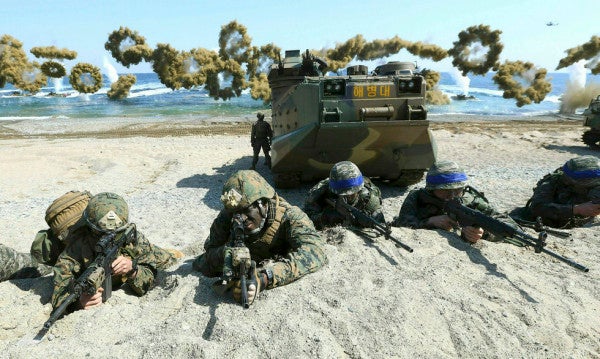 Joint U.S.-South Korean military exercises scheduled for next month are going ahead, a top Seoul official said Saturday, despite a threat by North Korea to boycott working-level talks with Washington and possibly restart nuclear and longer-range missile tests.

“As far as I know, President (Donald) Trump did not promise the cancellation of this upcoming joint military exercise,” Choi Jong-kun, secretary for peace planning to South Korean President Moon Jae-in, said at the Aspen Institute's annual strategic forum, according to a video of the event. “If he had ever done that … we would have (been) consulted and organized it and used it very strategically.”

North Korea hinted Tuesday that long-stalled working-level nuclear talks with the U.S. due to be restarted soon could be halted if the U.S. goes ahead with the planned 19-2 Dong Maeng (alliance) exercise scheduled to take place in August.

In a statement carried by the North's official Korean Central News Agency, a spokesman for the country's Foreign Ministry said that if the exercise is held, “it will affect DPRK-U.S. working-level negotiations.”

DPRK is the acronym for the North's official name, the Democratic People's Republic of Korea.

“We will make a decision regarding the working-level negotiations after watching the U.S.' upcoming moves,” the spokesman added.

The North has long denounced the joint exercises as a rehearsal for invasion, a charge the U.S. and its allies have denied.

In a separate statement also carried by KCNA on Tuesday, the Foreign Ministry said that the North is rethinking whether to abide by its self-imposed moratorium on nuclear and intercontinental ballistic missile tests, as well as other steps aimed at improving ties with the United States, linking these to the scheduled military exercises.

The last Dong Maeng exercise was held in the spring, replacing much larger exercises the U.S. and South Korea agreed to cancel in recent years. Dong Maeng is largely computer-based and much smaller than traditional exercises such as Foal Eagle or Key Resolve, but has still drawn the ire of the North.

Questioned about the preparedness of U.S. and South Korean forces, Choi said “combat readiness has never been compromised because while we have been suspending or canceling large-size exercises, small-scale exercises … have been continuing.”

“For the record, military interoperability has never been compromised,” he added.