‘Is This South Korea?’: North Korean Defector Was Reportedly Unsure Of Location

A North Korean defector receiving medical care at a South Korean hospital made an interesting request after confirming he was in South... 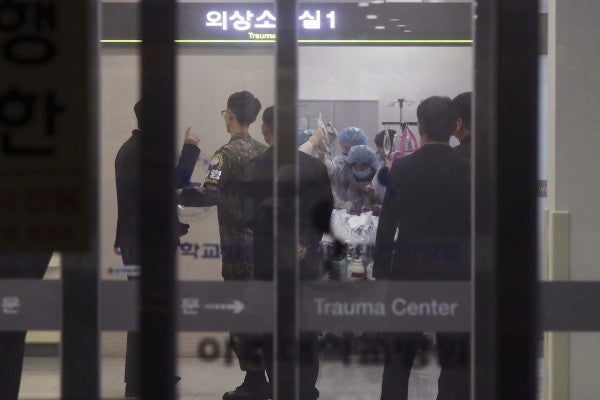 A North Korean defector receiving medical care at a South Korean hospital made an interesting request after confirming he was in South Korea, according to sources from the South Korean newspaper Dong-a Ilbo.

The defector was reportedly shot six times and received multiple surgical procedures after stealing a jeep and crawling southward as his comrades fired 40 rounds from their weapons. Doctors said the defector was in stable condition, according to Reuters.

“Is this South Korea,” the defector asked, according to the Ilbo.

After he received confirmation that he was in fact in South Korea, he reportedly said he would “like to listen to South Korean songs,” the Ilbo reported.

Early in recovery, the defector reportedly communicated with doctors by blinking his eyes and changing his facial expressions, the Ilbo continued.

Although authorities have yet to release the defector's identity and rank, he has become a symbol of the humanitarian struggle in North Korea after doctors discovered parasites in his digestive tract.

Lead surgeon Lee Cook-Jung said that there were dozens of parasites, some over 10 inches, that were removed during surgery: “In my over 20 year-long career as a surgeon, I have only seen something like this in a textbook.”