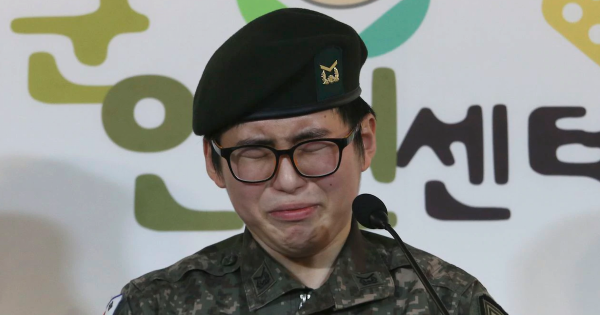 SEOUL (Reuters) – South Korea's first transgender soldier said on Wednesday she would sue the military after it announced it would dismiss her for undergoing gender reassignment surgery last year.

Byun Hui-su, who holds the rank of staff sergeant and is stationed in Gyeonggi Province, north of Seoul, had the operation in Thailand last year while on leave, and had expressed hope of continuing to serve in the female corps.

In her first public appearance since her case was publicized last week, Byun said she would pursue a lawsuit against the army, all the way to the country's highest court if necessary.

“I will continue to fight until the day I can remain to serve in the army,” she said. “I'll challenge the decision until the end, to the Supreme Court.”

The army said in a statement that while it will make efforts to protect soldiers' human rights and prevent discrimination, the surgery left Byun unable to continue to serve.

Byun broke down in tears as she described the decision to undergo surgery after suffering from gender dysphoria, which medical experts define as distress from the internal conflict between physical gender and gender identity.

“It was an extremely difficult decision to let my base know of my identity, but once I did, I felt much better,” she told reporters at a news conference in Seoul after the military announced its decision.

“I thought I would finish serving in the army and then go through the transition surgery and then reenter the army as a female soldier. But my depression got too severe.”

One army official with knowledge of the deliberations told Reuters that there should be no reason for the military to deny Byun if she reapplied to serve in the female corps after completing the legal process to formally become a woman.

A human rights organization had filed a petition with a national human rights watchdog urging the army to postpone its decision until after Byun had completed the court process, but the army said that legal proceeding is irrelevant to its personnel decisions.

The case has triggered debate over the treatment of transgender troops and soldiers from the wider LBGT community in the country, which requires all able-bodied men to serve for around two years.

Byun said she still hopes to serve in the military in the future.

“Apart from my gender identity, I want to show everyone that I can also be one of the great soldiers who protect this country.”