How Much Will A Space Force Actually Cost? The Pentagon Has No Idea Yet

The Pentagon does not yet know how much the nascent Space Force will cost, but nonetheless is working with Congress... 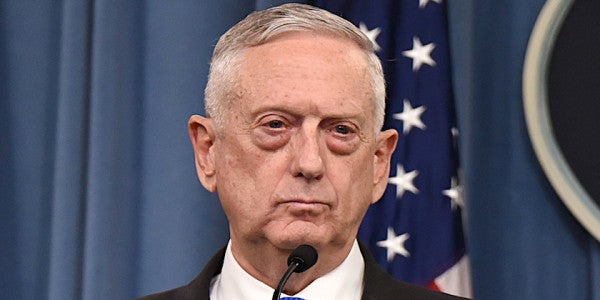 The Pentagon does not yet know how much the nascent Space Force will cost, but nonetheless is working with Congress to write legislation creating the new military branch proposed by President Donald Trump, Defense Secretary James Mattis said Tuesday.

“We have not done the costing estimates (on Space Force), that’s underway right now,” Mattis told reporters during a rare on-camera appearance in the Pentagon’s briefing room.

Earlier this month, Vice President Mike Pence announced the administration’s decision to create a Space Force as a branch of the military by 2020. While Congress had considered and rejected this idea over the last two years, the Trump administration laid out an ambitious agenda for the development of the first new military department since the Air Force was moved out of the Army in 1947.

As part of the fiscal 2019 defense authorization bill, Congress instructed the Pentagon to create a unified space command, replacing the current Space Command that is part of the Air Force. Mattis, flanked by Gen. Joseph Dunford, chairman of the Joint Chiefs of Staff, said that effort was already underway.

“Now we are implementing the National Defense Authorization Act and its provision for unified space command, in line with the president’s vision for a needed Space Force, while revising our vision for defending our assets in space and revising antiquated space acquisition processes,” Mattis said. “We are working now with Congress on our way ahead with regard to needed legislation for a separate department.”

“We’re still a few months away from standing up that command and coming to the secretary with a recommendation and the specific details of doing that,” he said. “What we don’t have is the full costs right now.”

Congress has stopped well short of creating a Space Force, and even rejected a proposal that would create a Space Corps within the Air Force, similar to how the Marine Corps is a part of the Navy. But Pence’s Space Force announcement met with immediate support from Reps. Mike D. Rogers, R-Ala., and Jim Cooper, D-Tenn., the top members of the House Armed Services Strategic Forces subcommittee and the architects behind the Space Corps idea.

Much of the resistance to making wholesale changes to the military’s space bureaucracy has come from the Senate. However, James M. Inhofe, the Oklahoma Republican in line to become the next chairman of the Senate Armed Forces Committee following the Aug. 25 death of Arizona Republican Sen. John McCain, recently signaled his willingness to consider the idea for inclusion in next year’s defense authorization legislation. Inhofe said he was open to holding hearings on the issue.

Mattis also threw cold water on the possibility that U.S. forces in Afghanistan could be privatized, a proposal floated by Blackwater founder Erik Prince that has reportedly intrigued the president.

“When Americans put their nation’s credibility on the line, privatizing it is probably not a good idea,” Mattis said.