President Donald Trump has ordered the Pentagon to create the first new U.S. military service branch in seven decades to... 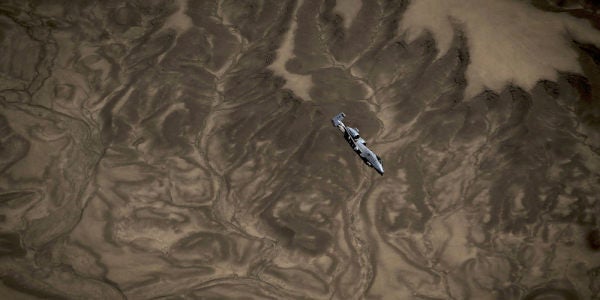 President Donald Trump has ordered the Pentagon to create the first new U.S. military service branch in seven decades to establish 'American dominance in space' — and while experts quickly knocked the idea as premature, there's no doubt that space is a warfighting domain.

As it stands, the Russia and China have both tested missiles that could bring the U.S. to its knees by crippling its satellites.

Satellites power GPS, which powers most civilian navigation and U.S. military equipment. Satellites also time stamp transactions at U.S. stock exchanges. Commercial satellites also relay internet, telephone, and radio communications. The U.S., without its space assets, could suffer societal collapse at the hands of its rivals before a single terrestrial battle is fought.

For this reason, experts assess that space absolutely has become a warfighting domain and one that may soon see lasers on spaceships duking it out in a war above the clouds.

“If there was a war between the U.S. and a China, for example, each side would likely try to take away the commanding heights of space from each other,” Peter W. Singer, a strategist at non-partisan think tank New America and the author of Ghost Fleet: A Novel of the Next World War told Business Insider.

But instead of starships chasing each other in dogfights and Star Wars-like duels in zero gravity, Singer said that most of a space fight would actually take place on plain old earth, though lasers are on the table.

The U.S. and its adversaries would fire missiles at their adversary's satellites powering navigation and trade, possibly from traditional land launchers or from ships at sea. The U.S. has plans to streamline the launching of satellites, and hopes any future space attacks can be thwarted by quick, cheap launches of constellations of small satellites.

Singer pointed out that the U.S. has observed Russian “killer or kamikaze satellites” maneuvering out in space in ways that suggest they could attack or block US satellites.

But much of the fighting wouldn't be as flashy as space-fired lasers knocking out killer satellites, instead, it would likely take place in a “cross between space and cyber” warfare, according to Singer.

U.S. and rival cyber warriors would start “trying to go after the communication links between space and earth on the ground. They might be trying to jam or take control of the satellites,” he said.

But therein lies the problem.

Many in Congress have spoken out about the proposed Space Force, calling it premature. The Air Force, in its measured language, seems to hate the idea. Singer called it “absurd” and a “joke.” Retired NASA astronaut Mark Kelly, also a former Navy pilot, combat veteran, and four-time space-flyer called it a “dumb idea.”

Basically, all the jobs the space force would do are already being done by the Air Force, and Navy, so making a costly new service this early into the space age could prove foolish.

“Yes, space is a clear part of national security,” said Singer, “but it's hard to imagine a better waste of time energy and budget.”