The United States has a new military service, the Space Force, but it has never been clear whether or not the country will also have a Space Guard and Reserve. 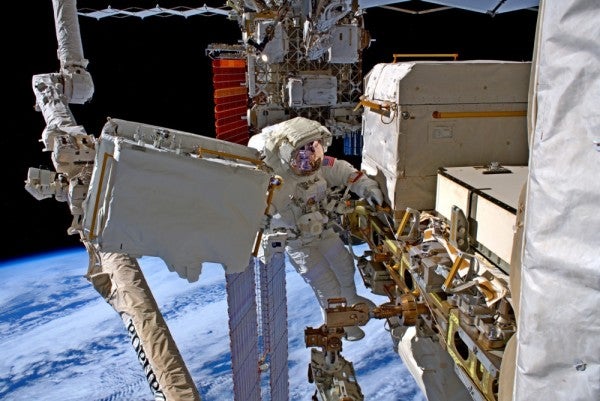 WASHINGTON — The United States has a new military service, the Space Force, but it has never been clear whether or not the country will also have a Space Guard and Reserve.

Many observers on Capitol Hill were hoping the Pentagon would have clarified the question by now. But a Feb. 3 report to Congress on the Space Force organizational plan — written by the Air Force, which oversees the Space Force — did not offer any answers.

And now, a draft Defense Department legislative proposal that is supposed to cover integrating the “active and reserve” elements of the Space Force into U.S. law also does not resolve the matter, according to officials familiar with the document.

The report is said to be sitting in Defense Secretary Mark T. Esper’s inbox. The legislative blueprint, required by the fiscal 2020 defense authorization law, was due to Congress last week.

Instead of answering the Space Guard question right away, leaders of the Space Force and of the Air Force are instead launching an in-depth study of the options, Air Force officials say.

Yet another report to Congress — on personnel management issues pertaining to the Space Force — is due March 19. But it will almost certainly not answer the question either, officials acknowledge.

Into this void Congress may step.

The National Guard and many of its staunchest advocates on Capitol Hill are impatient to capitalize on the momentum of the Space Force’s launch, and they want to move faster to create a Space Guard as soon as possible.

These lawmakers include Democratic Rep. Tim Ryan of Ohio and Republican Rep. Steven M. Palazzo of Mississippi, the co-chairs of the House Guard and Reserve Caucus, which comprises about one-third of the chamber.

“With the Space Force serving as the sixth official branch of our armed forces, we must think about how we can provide the absolute best that our country has to offer to this critical service,” Palazzo told CQ Roll Call in a statement. “I believe a massive part of that is inviting the citizens of this country, people with expertise in satellites, propulsion, engineering, and other STEM fields, to play a role in ensuring America remains the leader in space.”

Palazzo said through a spokeswoman that he is ready to work with the Pentagon and his congressional colleagues to determine precisely how reservists would support the Space Force.

A spokesman for Sen. Patrick J. Leahy of Vermont, co-chairman of the Senate National Guard Caucus and the top Democrat on the Senate Appropriations Committee, was more direct.

“If there is a Space Force, there should be a Space National Guard built around the Air National Guard assets that already exist,” the spokesman said.

Most key lawmakers, however, have yet to examine the Space Guard question. They may have to make up their minds in a couple of months, though, when the House and Senate Armed Services committees write the defense authorization bill.

At issue is whether the new Space Force will have guard and reserve units of its own, paid for through its budget, or have to turn to the Air Force or other services to use such people.

Proponents of creating Space Guard and Reserve units say it is important that such people be under the command and the budgetary control of the Space Force — which organizes, trains and equips the units — and the Space Command, which is a multiservice combatant command created in 2019 to operate forces.

Several of the general officers who command individual state National Guards held a news conference at the Pentagon earlier this month to press their case that it is vital that a Space Guard be created to give the new service the independent clout it needs.

The officers, known as adjutants general, said they were also making their case to Congress.

Officials expect some 16,000 military personnel to serve in the Space Force — either transfers from other services or recruits.

They are mostly located in Colorado but also work in seven other states, said John Goheen, a spokesman for the National Guard Association of the United States.

Goheen also emphasized that the debate is not about military personnel in space itself but rather people operating ground equipment that supports satellites and other systems.

“There’s a natural desire to be a part of this,” he said.

Jeffrey Phillips, a retired Army major general who is the executive director of the Reserve Officers Association, said reservists can offer the nation expertise derived from their military and civilian experience and can do so at about one-third the cost of active-duty personnel.

Leaders of the Armed Services committees are staying above the fray for now and taking a wait-and-see approach.

“We are early in the process, and working with the Department as they stand up the Active Component of the Space Force,” Monica Matoush, spokeswoman for the House Armed Services Committee under Chairman Adam Smith, D-Wash., said in a statement. ”We will review and consider any proposals that they send over regarding National Guard personnel assignments and/or transfer to the Space Force.”

Claude Chafin, spokesman for the committee’s Republicans, who are led by Rep. Mac Thornberry of Texas, noted that members are awaiting the personnel management plan next month.

“Mr. Thornberry is not likely to stake out a position ahead of receiving that plan,” Chafin said in a statement. “As he has said many times, Congressman Thornberry believes that Space Force should start small and evolve over time, gaining capacity and capabilities as it grows.”

Likewise, a Senate Armed Services Committee spokeswoman said Chairman James M. Inhofe, R-Okla., is awaiting a recommendation from the Trump administration on how to proceed on reservist support to Space Force.

“Based on that recommendation, he will act accordingly,” the spokeswoman said in a statement. “Any comment prior to that would be premature.”

But Gen. David Goldfein, the Air Force chief of staff, is already on record supporting the creation of a Space Guard and Reserve.

“As we work to achieve the president’s direction, I can’t envision a Space Force in the future that won’t have an active guard and reserve component to it,” Goldfein told National Guard Magazine just over a year ago. “It’s how we’re organized to fight.”