Steve Carell Netflix comedy 'Space Force' filed for trademark applications as early as January 2019, well ahead of the U.S. government 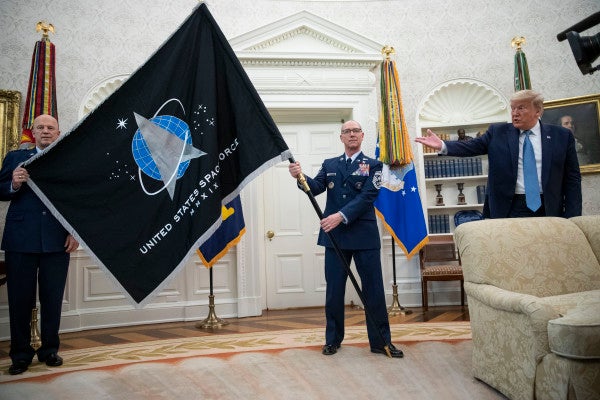 The U.S. Space Force is in a race to trademark its own name.

Plans are underway to secure trademark licensing related to the sixth military branch, currently under the Department of the Air Force, spokeswoman Lynn Kirby told Military.com on Tuesday.

The Hollywood Reporter reported last week that the Steve Carell Netflix comedy “Space Force” filed for trademark applications as early as January 2019, ahead of the U.S. government. That includes filings in Australia, Mexico and parts of Europe, it said. The Air Force, meanwhile, has a single, pending application in the U.S. for an “intent to use,” the magazine said.

“The Department of the Air Force has applied for trademark registrations for the Space Force mark with the United States Patent and Trademark Office (USPTO) and has common law rights to the word mark and other Space Force intellectual property,” Kirby said in an email.

But the real battle could be over branded merchandise sales, according to the Hollywood Reporter.

The Defense Department has launched trademark infringement warnings and lawsuits in the past.

For example, in 2017, the Army filed a notice of opposition with the Trademark Office against the Golden Knights, a National Hockey League team in Las Vegas, over its use of the service's elite parachute unit's name and similar branding. The two eventually came to a trademark “coexistence agreement” more than six months later, the Las Vegas Sun reported.

The Marine Corps, which vigilantly guards its trademarks, in one case took on Disgruntled Decks, a card game being sold on Amazon and Facebook that service officials found disrespectful to women in the military. The company ultimately removed the Marine Corps name and insignia from their decks.

For now, the military Space Force is “not aware of any trademark conflicts with the fictional program 'Space Force' produced by Netflix,” Kirby said of the show, which began streaming May 29. The 10-episode satire has received mixed reviews.

“'U.S. Space Force' is the name of a government entity and may not be misrepresented as an official endorsement, nor its marks used on commercial products without a valid trademark license,” Kirby continued. “As an equal branch in the Department of Defense, U.S. Space Force marks are afforded the same legal protections as those of the U.S. Army, U.S. Marine Corps, U.S. Navy, U.S. Air Force, and U.S. Coast Guard.”