Space Force launches its first official website. Do you want to know more?

To infinity and beyond. 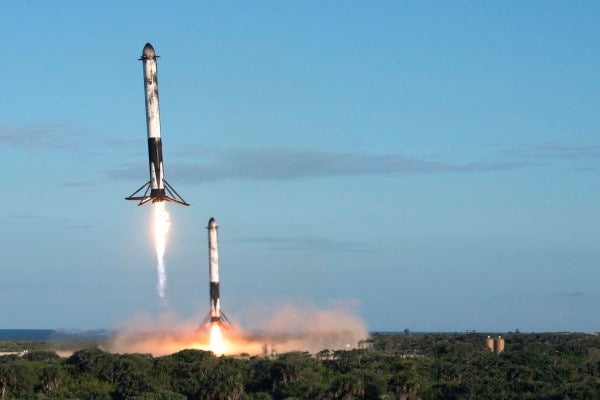 The U.S. Space Force has launched its official website, giving prospective service members a glimpse into the military's newest branch and how they can join the space mission.

Space Force falls under the U.S. Air Force, so recruits can surf the Air Force's career website, AirForce.com, to search for space-related jobs — including space operations, space systems operations, missile- and space-related maintenance and protection of missile and space facilities.

“The U.S. Space Force, an independent service singularly focused on protecting our interests and security in space, launches the nation into a new era,” Air Force leaders said in a letter to the force Dec. 20. Air Force Chief of Staff Gen. David Goldfein, Air Force Secretary Barbara Barrett and Gen. John Raymond, the head of U.S. Space Command and recent Chief of Space Operations appointee, all signed the letter.

“Forging a new service is a historic opportunity to deliver world-class capabilities to the American people,” the letter states.

Roughly 16,000 active-duty and civilian personnel who used to make up Air Force Space Command are now assigned to the Space Force following the enactment of the fiscal 2020 NDAA.

Air Force officials, discussing the move on background Friday, told reporters that Space Force cadre members will follow Air Force protocols when it comes to day-to-day activities, standards and requirements, such as physical training. But as the Space Force forms its own culture, policies — and eventually uniforms — will evolve.

The new Space Force website will be one of many tools used for recruiting, but a separate service academy for space is not currently under consideration, an official said, adding that the Defense Department will leverage current recruiting methods and commission officers from existing service academies, Reserve Officer Training Corps programs and officer candidate schools.

Following the signing of the NDAA, the Air Force noted that Trump “first mentioned the Space Force idea in March 2018,” according to the website's first news release.

In fact, it was Reps. Jim Cooper, D-Tennessee, and Mike Rogers, R-Alabama, who originally championed the idea.

The lawmakers created legislation in the fiscal 2018 NDAA that would have required the Air Force to stand up an internal “U.S. Space Corps” in hopes of taking adversarial threats in space more seriously.

That effort hit a roadblock months later and was ultimately dropped, only for the idea to be resurrected by Trump, who called for a Space Force to be the sixth branch of the military.

“The establishment of the U.S. Space Force is a historic event and a strategic imperative for our nation,” Defense Secretary Mark Esper said Friday. “Space has become so important to our way of life, our economy, and our national security that we must be prepared as a nation to protect it from hostile actions.

“Our military services have created the world's best space capabilities. Now is the time for the U.S. Space Force to lead our nation in preparing for emerging threats in an evolving space environment,” he added.

More information will be forthcoming on how troops may be called to support Space Force in a transferred or assigned capacity, according to the factsheet.

An airman who is “assigned” is a “person who performs work in support of a specific mission, in this case the U.S. Space Force; a 'transferred' individual in this situation is someone who has changed their enlistment or appointment as an officer from one particular branch of the Armed Forces to another,” the factsheet states.

Soldiers, sailors or Marines who support space operations and want to be part of Space Force may request an interservice transfer subject to a final decision from his or her chain of command.

— Editor's Note: This story has been updated to clarify the characterization of Trump's first mention of Space Force.