During a life cut short by war, Staff Sgt. Bryan Christopher Black lived as much as any man could. He... 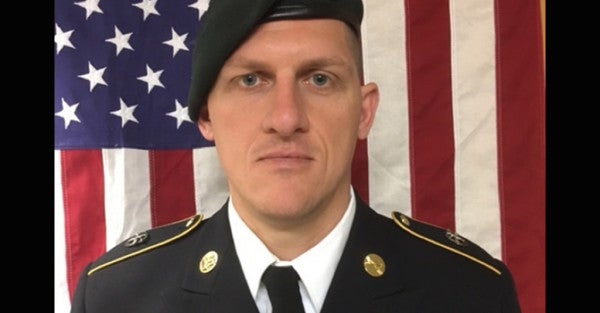 During a life cut short by war, Staff Sgt. Bryan Christopher Black lived as much as any man could.

But most of all, Black, 35, was a man who never settled. Throughout the whole of his life, he strove to learn more, to do more and to be better.

With that as his legacy, friends and family who gathered to celebrate Black’s life on Wednesday said, the Special Forces soldier will, in a way, live forever in the hearts and minds of those who were lucky enough to know him.

Speaking above Black’s flag-draped coffin in the center of Northwood Temple Church in Fayetteville, North Carolina, they celebrated the life of the soldier who, two weeks ago, was one of four from the 3rd Special Forces Group to be killed while on a mission in West Africa.

Black, Sgt. La David T. Johnson, Staff Sgt. Jeremiah W. Johnson and Staff Sgt. Dustin M. Wright died after coming under attack Oct. 4 while on patrol with Nigerien forces near the border of Niger and Mali. The attack was the deadliest for deployed Fort Bragg soldiers since July 14, 2010.

According to military officials, the soldiers – part of an ongoing mission to North and West Africa undertaken by the 3rd Special Forces Group since 2015 – were providing advice and assistance to Nigerien security force counter-terrorism operations. According to reports, the soldiers and their Nigerien partners were ambushed by a large force of enemy fighters.

Black, of Puyallup, Washington, lived in Fayetteville with his wife, Michelle, and sons, Ezekiel and Isaac.

He was assigned to the 2nd Battalion, 3rd Special Forces Group and had served in the Army since 2009. He will be buried at Arlington National Cemetery at a later date.

On Wednesday, more than 150 friends and family gathered to honor his life. Dozens of other supporters stood across the road from the church on Ramsey Street to pay their respects.

Black’s father, Hank Black, said the words of comfort and acts of kindness shown by family, friends and strangers alike would be remembered forever.

He said the family continued to mourn for Black, as well as for the other three soldiers killed in Niger and was continuing to pray for those who were wounded in the attack.

Hank Black said his son only lived 35 years, but it was a full life with no wasted time.

According to the family, Black’s competitive drive and strong will was obvious early in his life.

As a fourth-grader, Black was irritated when his brother won a trophy at a chess tournament. Instead of festering, he dedicated himself to mastering the game.

By the time Black was in the sixth grade, he was among the best scholastic chess players in his home state of Washington and tied for second in the nation in his grade.

He also excelled at athletics. At a wrestling camp in high school, Black suffered a heat stroke that hospitalized him for five days. Once he was released from the hospital, he insisted on returning to the camp to finish his training.

By his senior year at Puyallup High, family said, Black was wrestling in the state championship.

Hank Black said his son never stopped trying to improve himself. While others “should, would or could,” Black “did,” he said.

Black graduated from high school in 2000, simultaneously earning an associate’s degree. He graduated from Central Washington University with a degree in business administration two years later.

According to the family, Black helped pay for his schooling by buying and selling rare coins throughout high school and in college.

After school, he was a ski instructor and part-time construction worker in Mammoth Lakes, California.

A former roommate in California, Joe Donovan, said that when he first met Black, he was simultaneously playing six games of online poker and six games of chess.

“What are you doing,” he recalled asking Black.

Donovan spoke of how Black adored Michelle, whom he met in California. And how Black would walk around stunned, not believing his luck in the two finding each other.

Black lived life to the fullest, Donovan said. He was a man of many talents, but he never boasted.

“Men of Bryan’s caliber are rare …” he said. “When we witness a life like that it commands our attention and our respect.”

Several soldiers who served alongside Black also spoke. They included a sergeant first class who deployed to Niger with Black during his first deployment to the country two years ago.

The soldier described how Black’s intellect could be intimidating at times. In the rare instances where Black didn’t know something, he would find a book and read overnight to learn as much as he could.

Through the Army, he learned French and Arabic to better communicate with the Special Forces’ African partners. On his own – using an English to Hausa dictionary – he learned the local dialect spoken by those the soldiers worked with in Niger.

A Special Forces captain, who led Black’s A-team on that deployment, said Black became a local celebrity due to those efforts to connect and communicate with partners in Niger. Villagers would often gather to wait for Black or call his name as the soldiers walked through their camp or through the nearby villages, he said.

“I’m not going to lie, but I was a little jealous of Bryan’s celebrity status,” the captain said.

Black loved teaching. He would go out of his way to explain concepts to others and share his devotion to learning and self-development.

But most of all, Black was a loving father, who saw a lot of himself in both of his sons, those who knew him said.

The Special Forces sergeant said Black was a great person whose character spoke for itself.

“You will always live in my heart and memories,” he said.

Another soldier, a first lieutenant who attended Ranger School with Black, said he was a selfless leader and kind friend, a role model and a leader who held others and himself to high standards.

Hank Black said his son was never afraid of a new challenge. From his childhood to his last breath, he would set his sights on a goal and then achieve it. In the process, he would often improve the lives of those around him.

Quoting the author A.A. Milne, Hank Black said “How lucky I am to have something that makes saying goodbye so hard.”

He urged those in attendance to honor Black by following his example.