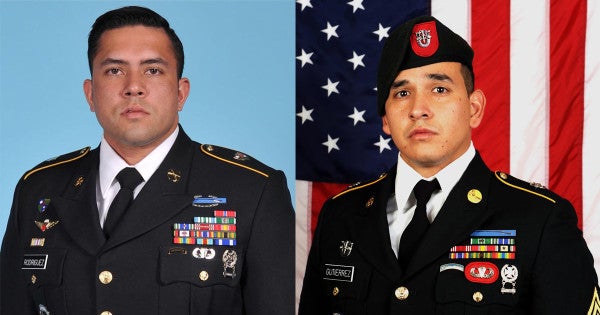 EGLIN AFB — The two Army 7th Special Forces Group (Airborne) soldiers who died Saturday in Afghanistan are being remembered as selfless warriors by the group's commander.

Both men were 28 years old, and both were promoted posthumously to the rank of sergeant first class, according to the news release. Both also were posthumously awarded the Purple Heart and the Bronze Star Medal.

“Sgt. 1st Class Gutierrez was a warrior that exemplified selfless service and a commitment to the mission, both values that we embody here in the 7th Special Forces Group,” said Col. John W. Sannes, commander of the group, headquartered at Eglin Air Force Base at Camp Simons near Crestview.

“Our priority now is to take care of his family and teammates,” Sannes added. “We will provide the best possible care during these trying times.”

Addressing Rodriguez's death, Sannes said he “was selfless and served honorably; he was certainly among the best in our unit.”

Sannes went on to say that “at the Red Empire (an informal name for the 7th Group), we take care of our own, and Sgt. 1st Class Rodriguez's family will forever be a part of us. We will assist them in any way we can to help them through these trying times.”

Born in Jacksonville, North Carolina in 1991, Gutierrez, late of San Antonio, Texas, enlisted in the Army in 2009 as an infantryman. He was stationed at Fort Bragg, North Carolina while assigned to the 504th Parachute Infantry Regiment

Eight years ago, Gutierrez attended Special Forces Assessment and Selection at Fort Bragg, and was selected to attend the Special Forces Qualification Course. He graduated in 2015 as a Special Forces communications sergeant and was assigned to the 7th Group's 3rd Battalion.

Rodriguez, born in 1991 in Las Cruces, New Mexico, graduated from Mayfield High School in 2009 and enlisted in the Army that same year. After completing the Basic Airborne Course and the Ranger Assessment and Selection Program, he was assigned to the 3rd Ranger Battalion of the 75th Ranger Regiment.

A GoFundMe page has been set up by a fellow military spouse in Crestview to benefit Gutierrez's wife and family. The effort, online at https://bit.ly/38hltfL, was closing in on its $50,000 goal by late Monday afternoon.

A GoFundMe page also has been set up for Rodriguez, online at https://bit.ly/2SEClGW. As of late Monday afternoon, the campaign had stretched past its $25,000 goal.

The organizer of the campaign, identified as Cody Hunn, used the campaign page to recall Rodriguez's days with the Army Rangers, saying his work there “was paramount in training new recruits and maintaining the readiness of their teams.”

Also according to the GoFundMe page, Rodriguez “was the guy in the teams that always put his men before himself.”

My prayers are with the family & friends of New Mexico's own SFC Antonio Rey Rodriguez. He served his country proudly & selflessly – his sacrifice will not be forgotten. My thoughts are with his loved ones & with every one of the nation's servicemembers.https://t.co/2XYZQsEH0y

“My prayers are with the family & friends of New Mexico's own SFC Antonio Rey Rodriguez,” she said via Twitter. “He served his country proudly & selflessly – his sacrifice will not be forgotten. My thoughts are with his loved ones & with every one of the nation's service members.”

“San Antonio's hearts and prayers are with Sgt. 1st Class Javier J. Gutierrez's family,” Nirenberg wrote. “I know we'll be there to lift up the Gutierrez family in these trying moments.