Nothing says “I don't love you” like shooting your partner. That particularly applies to the numerous places around the world... 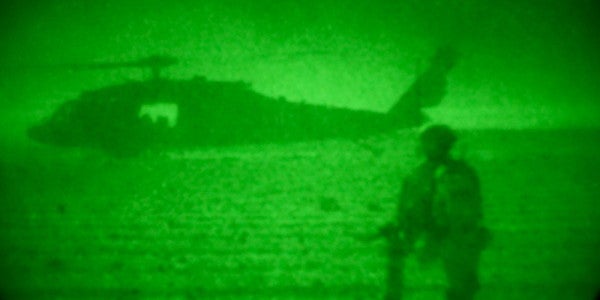 Nothing says “I don't love you” like shooting your partner.

That particularly applies to the numerous places around the world where American special forces are working with local troops, who naturally frown on being blown up by their mentors. As it is, numerous Americans have been killed by friendly fire in Afghanistan and Iraq. How much more difficult is the situation for technologically unsophisticated armies, lacking command and communications equipment, operating alongside U.S. troops.

Hence, U.S. Special Operations Command—and the allied armies they work with—would be grateful for anyone who can come up with a reliable means of stopping fratricide. The idea is similar to Identification Friend or Foe (IFF) transponders on aircraft that emit signals that enable radars to identify these planes as friendly: without them, it would be too easy to mistake a friendly plane as hostile.

“Currently there is difficulty identifying mounted and dismounted partner forces in the combined air and ground battlespace during both day and night operations, and in all weather conditions,” according to a SOCOM research solicitation .

SOCOM wants a cheap, expendable technology that can be given to allied forces so that U.S. troops can identify them. “Potential solutions addressing this problem should be easy to operate with minimal training,” SOCOM said. “Additionally, based on the need to transfer or give this equipment to partner forces in significant quantities, individual devices must be low cost and contain technology that can be transferable to the partner force.”

“The solution must be detectable by existing Special Operations Forces, U.S. military and Coalition observation and targeting systems, both ground and aerial, out to a tactically relevant range (1 kilometer—threshold; 4 kilometers—objective), be compatible with a standard and non-standard military uniforms, soldier carried equipment and vehicles.”

The equipment should be capable of operating for up to eight hours without needing a battery recharge. “This technology should be able to work in all weather and all environments from urban to snow to highly cluttered desert floors, equatorial summer or on vegetation that may have moisture,” SOCOM said. “Minimum weight, small form factor, simplicity, and durability are desirable characteristics.”

Note the emphasis on technological simplicity, which suggests that the device is destined for armies such as the Afghans, Kurds, Syrian rebels and African troops.

Phase I of the project will be a feasibility study to determine what current technology is capable of providing. Phase II will call for a prototype Partner Force Identification Friend or Foe device. SOCOM says there could be spin-off applications for U.S. law enforcement, border patrol and search and rescue teams.

Unfortunately, this project may only solve part of the problem, as shown by a recent incident in which a U.S. general was wounded by an Afghan government soldier who apparently was a Taliban sympathizer. This device may protect allied troops from American fire, but it won’t protect American soldiers from the fire of their “allies.”