U.S. Special Operations Command is weighing the use of nutritional supplements or even performance-enhancing drugs to push the abilities and... 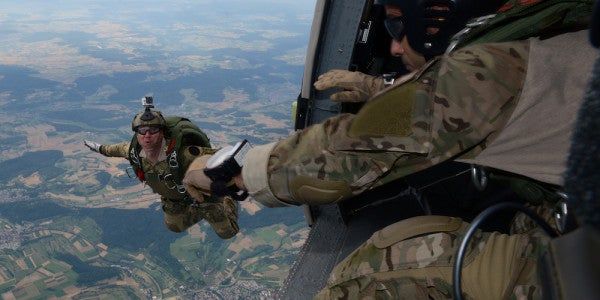 U.S. Special Operations Command is weighing the use of nutritional supplements or even performance-enhancing drugs to push the abilities and endurance of its forces beyond current human limits, according to a report from Defense News.

“If there are … different ways of training, different ways of acquiring performance that are non-material, that's preferred but in a lot of cases we've exhausted those areas,” Ben Chitty, the senior project manager for biomedical, human performance, and canine portfolios at U.S. SOCOM's Science and Technology office, told Defense News.

While Chitty said SOCOM was exploring nutritional supplements, other substances were in consideration as well.

“For performance enhancing drugs, we'll have to look at the makeup and safety in consultation with our surgeon and the medical folks before making any decisions on it,” he told Defense News.

One goal of the research to develop what Defense News referred to as “super soldiers” would be to expand troops' ability to operate in places not well suited for humans — high altitudes or underwater in particular.

U.S. Air Force Staff Sgt. Bronc Berry, a loadmaster with the 522nd Special Operations Squadron, closes the ramp of an MC-130J Commando II aircraft after an airdrop and static line jump May 6, 2014, during Emerald Warrior 14 at Hurlburt Field, Fla.Photo via DoD

While the evaluation process would emphasize safety — “We're not cutting any corners,” Chitty said — any proposal to deploy pharmaceutical substances among special-operations troops is likely to draw scrutiny, especially in light of recent revelations about a what Capt. Jamie Sands, the commander of 900 Navy SEALs on the East Coast, called a “staggering” number of drug cases among Navy Special Operations units.

Three active and retired SEALs spoke to CBS in April, with their faces masked and voices disguised, telling the network that illicit drug use among SEAL units was increasing.

“People that we know of, that we hear about have tested positive for cocaine, methamphetamine, heroin, marijuana, ecstasy,” one of them said.

Another active-duty SEAL described by the CBS report tested positive once in the past for cocaine, and, during a new round of testing prompted by a drug-related safety stand-down in December, tested positive again for prescription drugs. He was being removed from SEAL teams.

While Navy SEALs are supposed to undergo regular drug tests, that doesn't always apply when they are away from their home bases. As demand for SEALs in operations around the world has grown, they have spent an increasing amount of time deployed.

Three active-duty SEALs told CBS they hadn't been tested in years. Sands, for his part, announced in December that SEALs would start undergoing tests while deployed.

While Chitty did not mention the frequency of operations — and the physical and emotional wear and tear related to it — as a reason for pursuing nutritional and pharmaceutical supplements, other special-operations officials have warned that their forces are being depleted by an overreliance on them.

“We've been operating at such a high tempo for the last decade plus, and with budgets going down, what we've had to do is essentially … eat our young, so to speak,” Theresa Whelan, principal deputy assistant secretary of defense for special operations, said during a House Armed Services Committee session this month.

Special-operations commanders, while acknowledging the strain increased operations have put on their units, have emphasized that they are still capable of addressing threats emerging around the world. But, Whelan told Congress, constant readiness has had and will have consequences.

“We've mortgaged the future in order to facilitate current operations that have impacted readiness and it's also impacted the development of force for the future,” she said. “And as the threats grow, this is only going to get worse.”