A Fort Drum officer whose pro-communist and anti-Trump social media posts have spurred outrage and an Army investigation apparently raised concerns among... 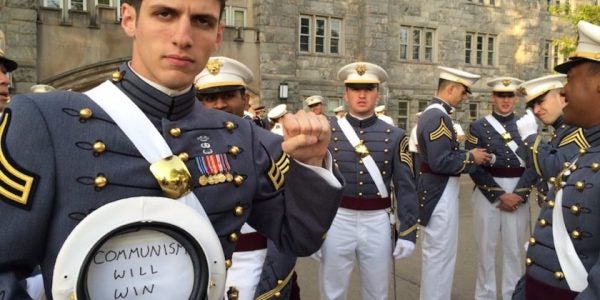 A Fort Drum officer whose pro-communist and anti-Trump social media posts have spurred outrage and an Army investigation apparently raised concerns among his superiors in 2015 while studying at West Point.

In documents obtained by the Daily Caller, Lt. Col. Robert M. Heffington, a professor at West Point, said he found the social media posts by 2nd Lt. Spenser Rapone, then a cadet, “extremely disturbing.” He noted at the time that one of Rapone’s posts said “(Expletive) this country and its fake freedom,” and others praised communism, Marxism and Karl Marx.

“I cannot reconcile the image of a first class cadet at West Point with the things he has posted online for the world to see,” the lieutenant colonel said in a sworn statement. “To me, these are red flags that cannot be ignored, and I fail to see how this individual can possibly graduate and become a commissioned officer in six months.”

Lt. Rapone is currently under investigation by post officials, and his social media posts, including those made while wearing his West Point uniform, were condemned by the academy.

Col. Heffington’s statement from November 2015 also said Lt. Rapone showed “extreme disrespect” to him when confronted about the volume of a conversation he had with a professor and refused corrections on standards like getting a haircut.

“His utter contempt for my rank and position as an Army officer was blatantly obvious and, to me, it indicates that CDT Rapone has a serious problem with military authority figures.”

He later said Rapone’s social media posts at best “reveal the philosophical infatuations of a precocious adolescent,” and at worst “a severe mental or psychological disorder” or values “at odds” with West Point and the Army.

“He may at some point grow out of this phase, but the Army does not have the luxury of allowing him the opportunity to sort out his beliefs while charged with the sacred duty of leading American Soldiers,” Col. Heffington said.

Lt. Rapone, a member of the 10th Mountain Division’s 2nd Brigade Combat Team, first drew attention when he tweeted an image from his Twitter account, @punkproletarian, with “Communism Will Win” written into his West Point cadet hat.

Other online statements by the lieutenant criticized President Trump and members of his administration.

If taken to a court martial, Lt. Rapone could face confinement for violating multiple parts of the Uniform Code of Military Justice.

The full Daily Caller report can be found at http://wdt.me/westpoint-rapone.