More than 100 million people are estimated to tune in to Sunday’s Super Bowl showdown between the Seahawks and the... 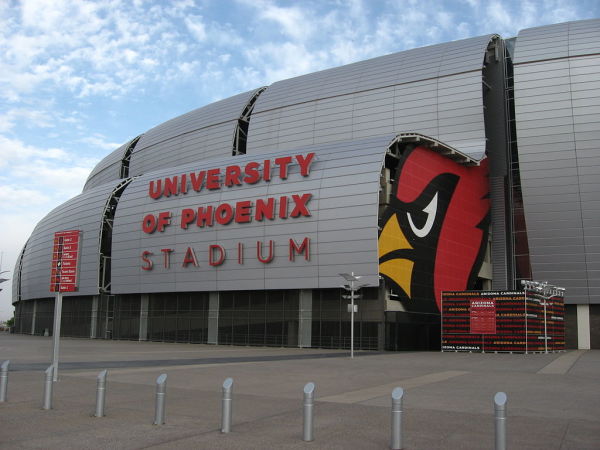 More than 100 million people are estimated to tune in to Sunday’s Super Bowl showdown between the Seahawks and the Patriots. But there’s a subplot to the stage for the game — the Arizona Cardinals’ stadium in Glendale, Arizona — that speaks to a contentious topic in the modern military veterans’ world.

The Arizona Cardinals sold the naming rights for their stadium to the University of Phoenix, a for-profit, largely online, system of colleges and universities.

It was a massive corporate sponsor deal inked in 2006. According to a 2009 New York Times piece, the deal spans 20 years and costs the University of Phoenix $7.7 million for each year of the deal, or $154 million over the course of the sponsorship.

But where do they get that much money for a marketing endeavor? The answer lies in programs designed to help the modern military and veterans population, as well as a business model designed to recruit hundreds of thousands of students and charge them lofty tuition rates for questionable degrees.

The school reportedly employs as many as 8,000 recruiters, who work to make sure paying students are enrolled at their campuses across the country. Due to its for-profit model, the University of Phoenix has to justify its business model to the people who own stock in its parent company — the Apollo Education Group — not its student population.

But having its students take our burdensome student loans to finance their education is not the University of Phoenix’s sole source of income. Indeed, the school heavily targets the modern military veterans population, whose members have the post-9/11 G.I. Bill at their disposal, which can pay hundreds of thousands of dollars to veterans obtaining degrees after their military service.

The University of Phoenix system has made a staggering amount of money from the G.I. Bill — almost $1 billion, according to a report published by the Daily Beast in 2014.

One of those University of Phoenix campuses with a lower graduation rate than student loan default — the one in San Diego, California — has a graduation rate of 10% and a student loan default rate of over 26%, according to that USA Today report. That campus was part of a Center for Investigative Reporting report published last year. In it, reporter Aaron Glantz detailed how since 2009, that specific San Diego campus — with an enrollment of around 3,000 students — had taken more money from the G.I. Bill than any individual college or university in the United States.

What’s more, according to Glantz’ reporting, that same individual University of Phoenix San Diego campus has taken more G.I. Bill money since 2009 than every school in the entire University of California system combined.

This disparity, this profiteering on taxpayer dollars that are intended to help veterans, has led to one group, the Veterans Student Loan Relief Fund, to create a change.org petition surrounding the University of Phoenix.

The fund exists to offer financial relief to veterans who have fallen in dire straits due to burdensome student debt. The group’s website details much of the problems with the University of Phoenix’s financial model. According to the group, the average American community college spends more than $3,000 per student on instruction. In 2010, the University of Phoenix spent fewer than $900 per student on instruction.

Additionally, the Apollo Education Group, the publicly traded parent of the University of Phoenix, gets a staggering 92% of its revenue from federal funds like the G.I. Bill, according to the fund.

“Support students, not stadiums,” the change.org petition reads, reflecting that no other institution of higher education owns the rights to a professional sports arena. No other school can afford to. No other school spends a reported $2,225 per student on marketing.