According to a new audit from the Government Accountability Office, both the Departments of Defense and State "have not assessed the effectiveness of human rights training for foreign security forces" — and while the Pentagon agreed to establish a process to do so, State simply can't be bothered 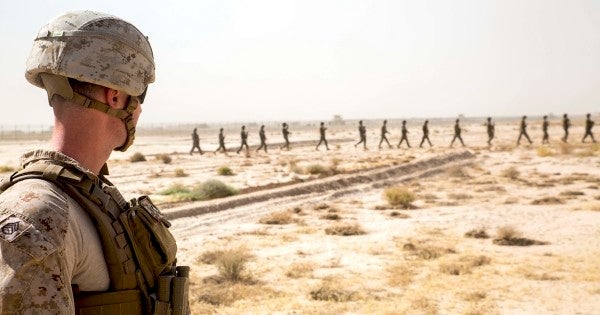 By law, the United States is required to promote “human rights and fundamental freedoms” when it trains foreign militaries. So it makes sense that if the U.S. government is going to spend billions on foreign security assistance every year, it should probably systematically track whether that human rights training is actually having an impact or not, right?

Apparently not. According to a new audit from the Government Accountability Office, both the Departments of Defense and State “have not assessed the effectiveness of human rights training for foreign security forces” — and while the Pentagon agreed to establish a process to do so, State simply can't be bothered.

The GAO audit was initiated under the National Defense Authorization Act for fiscal year 2018 to assess the Pentagon and State Department's adherence to 10 U.S. Code § 333, which mandates that any program designed to build the capacity of foreign security forces must include elements that promote “observance of and respect for the law of armed conflict, human rights and fundamental freedoms, the rule of law, and civilian control of the military.”

While the GAO found that the while the Pentagon “has taken initial steps to develop monitoring and evaluation policies but officials stated that they have not yet determined whenDOD will evaluate human rights training,” State Department officials told the GAO that “they do not know when the agency will begin monitoring and evaluating human rights training” conducted under its $100 million International Military Education and Training (IMET).

That the Pentagon and State haven't slapped together a unified human rights training tracking system isn't totally surprising; they are, of course, part of the same nation-building apparatus that used Microsoft Excel to track gross human rights violations in Afghanistan until 2017.

But what is surprising is how the two agencies responded to the GAO's recommendations, captured in this spicy meatball here (emphasis ours):

GAO is making three recommendations, including that the Secretary of Defense establish a process to systematically track mandated human rights training and develop a timeline for implementing monitoring and evaluation. DOD agreed. GAO also recommends that the Secretary of State develop a plan with a timeline to monitor and evaluate such training. State disagreed. GAO continues to believe the recommendation is valid as discussed in the report.

State's logic is detailed more thoroughly in the bottom of the GAO report (emphasis ours, again):

So according to the GAO, the State Department objected to something the GAO … didn't even ask for?

This isn't just a bizarre objection, but potentially problematic one. Under the 1997 'Leahy Law,' the U.S. government is outright prohibited from furnishing aid to foreign allies that face credible allegations of gross human rights violations, a provision “intended to leverage U.S. assistance to encourage foreign governments to prevent their security forces from committing human rights violations.”

This, as many observers have already noted, is a stark departure from the United States that led the United Nations to adopt the United Nations Universal Declaration of Human Rights in the aftermath of World War II, a nation that enshrined “inherent dignity” and “equal and inalienable rights” at the heart of its diplomatic mission abroad. Then again, Secretary of State Mike Pompeo did just establish a new panel to reexamine “the role of human rights in American foreign policy.”