US May Deploy Even More Stealth Bombers To Korean Peninsula, Officials Say

Defense officials at the highest levels of South Korea's government told Yonhap News on Sept. 27 that the U.S. would deploy “strategic … Continued 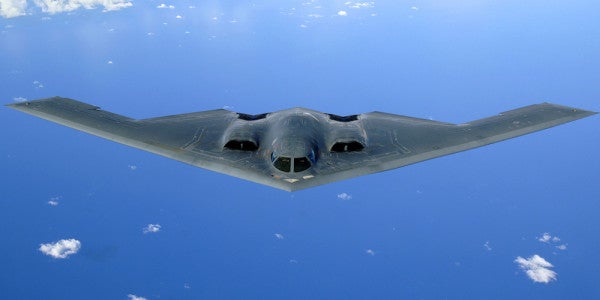 Defense officials at the highest levels of South Korea's government told Yonhap News on Sept. 27 that the U.S. would deploy “strategic assets” to the peninsula amid tensions with North Korea.

“The U.S. has pledged to expand the rotational deployment of its strategic assets near the Korean Peninsula,” Chung Eui-young, the chief of the National Security Office said according to Yonhap.

While “strategic assets” can refer to nuclear weapons, it can also mean nuclear-powered submarines, aircraft carriers, or stealth aircraft. Chung said the deployment could happen as early as the end of 2017.

Another South Korean publication, Chosun, reported on Sept. 26 that a government source said the U.S. may send an aircraft carrier, B-2 stealth bombers, and the world's stealthiest and most lethal combat plane, the F-22 Raptor.

The talk of increased U.S. firepower in South Korea comes after North Korea interpreted some of President Donald Trump's tweets as a declaration of war, and announced it would try to shoot down U.S. bombers flying anywhere near its airspace.

As it stands, the U.S. has B-1B Lancer bombers stationed in Guam that frequently respond to North Korean missile or nuclear tests by doing flybys near its borders accompanied by advanced US, Japanese, or South Korean jets.

But the B-1B isn't nuclear capable, nor is it stealth. The B-2, however, has both.

Senior Airman Mindy High prepares to launch a B-2 Spirit bomber during a mission at Andersen Air Force Base, Guam.Photo via DoD

Although the U.S. already has F-22 and F-35 stealth aircraft stationed nearby in Japan, placing them on the Korean Peninsula could spur further escalation of an already-tense situation.

The B-2 can carry 16 nuclear warheads as well as massive ordnance penetrators — bunker-busting bombs that would be the U.S.'s best bet for hunting North Korea's leadership as they hide in underground caves.

NK News recently reported that the U.S. had to tell North Korea about the last flight of the B-1 near its borders because Pyongyang couldn't really track the supersonic bomber jet. If North Korea struggled with the non-stealth B-1, then it has little hope of spotting a B-2 and virtually no chance of spotting the F-22 on its radar screens.

A U.S. Air Force F-22 Raptor, 49th Fighter Wing, Holloman Air Force Base, N.M., flies over the Nevada Test and Training Range for a training mission during Red Flag 11-3, March 3, 2011. Red Flag is a realistic combat training exercise involving the air forces of the United States and its allies. The exercise is hosted north of Las Vegas on the Nevada Test and Training Range.(U.S. Air Force photo by Airman 1st Class George Goslin)Photo via DoD

Still, the move could backfire and destabilize the situation in North Korea, as the U.S.' asymmetrical advantage over North Korea's aging forces could cause an uneasy Kim Jong Un to think he has no choice but to strike first.

“Often times when we think we’re sending very clear signals, we can’t be sure they’re being interpreted that way,” Jenny Town, the assistant director of the U.S.-Korea Institute, told Business Insider of the U.S.'s attempts to show its strength towards North Korea.

“In South Korea they’ve talked about trying to scare North Korea into changing their behavior,” Town said, referring to the deployment of U.S. military assets to South Korea. But, “the way they change their behavior is not necessarily the way we want them to.”