Breaking down the stigma and misunderstandings about Post Traumatic Stress Disorder is the goal of a retired U.S. Army veteran walking across the country this year. 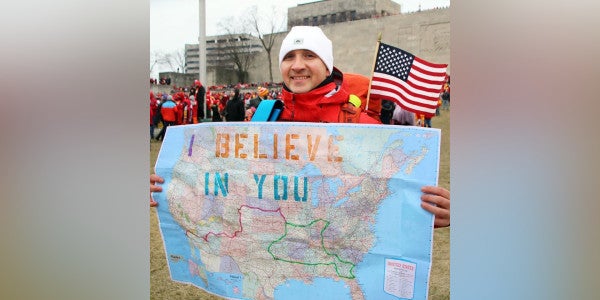 Breaking down the stigma and misunderstandings about Post Traumatic Stress Disorder is the goal of a retired U.S. Army veteran walking through the Wabash Valley on U.S. 40 this weekend.

Stephen Meyers has been traveling this past week through Illinois, talking to people he meets along the roads, at restaurants and stop-overs. He wants to bring “a tsunami of attention” to the issue of PTSD as he makes his way from Kansas City, Missouri, through the eastern and southern United States.

He arrived in Terre Haute on Sunday, and was continuing his walk to Indianapolis, then turn south through Cincinnati, Kentucky, Tennessee, Georgia and reach the coast in Florida.

“I thought I was going to be walking and occasionally people would be talking to me,” Meyers said Friday afternoon as he left Effingham, Illinois. “But people want to talk to me everywhere.”

Meyers began walking Feb. 15. He plans to be in California by Thanksgiving – meaning he will turn around and walk back across half the country so he can reach the West Coast.

Meyers is inspired by his personal experience with PTSD. He served in Iraq from 2005 to 2007 and in Afghanistan in 2013.

In 2008 when he sought help for PTSD for his anti-Islamic sentiments, he said, he felt betrayed when his therapist turned out to be a person of Middle Eastern heritage, so he did not go back for counseling.

He also found that prior to 2008, the Army was not helpful to soldiers who sought assistance with mental health issues.

“You didn't talk about it because you wanted to keep your job,” Meyers said.

He found out that his high security clearance would be jeopardized if he requested counseling.

It was his girlfriend who eventually got Meyers to seek PTSD counseling in 2015 due to his ongoing issues.

He turned to a veterans center because he had lost confidence in the Army, he said.

“People do what their leaders do,” Meyers explained. “I did 20 years of active duty and two years of National Guard, and in that time, none of my commanding offers got any help, or let it be known if they did. So, in my mind, I was following in their footsteps by not getting help.”

He said he is thankful for his girlfriend's encouragement to get counseling, because it often takes an outside force to prompt that first step toward change and healing.

“A lot of people know the care is there, but they don't get it until they get an ultimatum, such as get it or get fired, or lose a relationship,” he said. “I would like people to get help before those things happen.”

Meyers has the support of veterans groups and other volunteers who help him along his route by providing resting places, meals and local transportation when needed.

A lot of people are stopping to talk, and he's taking selfies with them and posting them on his walking page, he said.

Meyers said he has talked to Vietnam veterans who say they are now experiencing issues after years of being fine.

“My message to them – mothers, parents, siblings – is to get treatment themselves, and then maybe the veteran will see what it's about and get treatment,” Meyers said. “Everyone can use some counseling.”

Anyone wanting to talk to Meyers is encouraged to look him up along U.S. 40 in the next few days, or check out his digital logs for the journey.