Staff Sgt. Steven Carrillo is a member of the 60th Security Force Squadron and team leader of the Phoenix Ravens, a specially-trained security force that protects aircraft from terrorist and “criminal threats" 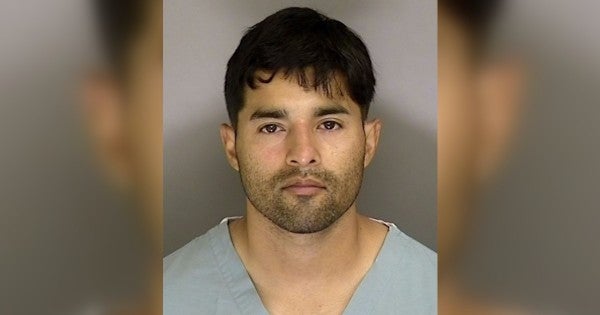 The U.S. Air Force sergeant accused of killing a sheriff’s deputy and severely injuring another was a domineering, narcissistic man who mentally abused his wife before she killed herself two years ago, a relative said Monday.

“He was a wannabe and I don’t think he measured up the way he wanted himself to be, so he was the type of person who took it out on other people,” Charlotte Tolliver-Lopes told the Bay Area News Group in a phone interview from her home in Arizona. “He did a lot of damage to our family just by destroying my niece. It devastated my family.”

Steven Carrillo, 32, remains hospitalized and in custody after authorities say he ambushed two Santa Cruz County sheriff’s deputies near his home in the mountain town of Ben Lomond on Saturday, firing at them with guns and detonating explosives. Sheriff’s Sgt. Damon Gutzwiller, a 14-year veteran with a pregnant wife and a young child, was killed. A second deputy remains hospitalized with serious injuries.

Federal investigators are trying to determine whether the Saturday attack is connected with the killing of a federal security officer in Oakland late last month. Both incidents involved a white van. Santa Cruz County authorities are planning a news conference at 1 p.m.

“He gave me the impression he had a little issue with authority,” said Tolliver-Lopes, the great aunt of Carillo’s late wife, Monika Carrillo. “It all had to be about him.”

The couple, who were both in the Air Force, had two young children. The boy and girl have been living with relatives since sometime after their mother’s death.

Steven Carrillo joined the U.S. Air Force in 2009, and was transferred to Travis Air Force Base in 2018. He was a member of the 60th Security Force Squadron and team leader of the Phoenix Ravens, a specially-trained security force that protects aircraft from terrorist and “criminal threats.”

Tolliver-Lopes said that when she heard that Carrillo was accused of ambushing the deputies, she said that “fits his personality.”

“Sneak up behind you — that’s the way he would behave,” she said. “I don’t think he has the guts to face you. He’s the type who would do it around the corner. He wouldn’t confront anyone dead on — a woman, yeah, he feels superior to them, but a man, no.”

Her great niece committed suicide while in an Air Force training program in late May 2018 in North or South Carolina, she said. Carrillo was in California at the time, but Tolliver-Lopes says her family has long blamed him for her death and complained to the Air Force about his behavior.

While his wife was away, Tolliver-Lopes said, Carrillo apparently was “kicked out” of their apartment and he and their two children lived briefly in a van.

Carrillo is about 5-foot-6 and had issues with his height, she said, and made it clear he didn’t like the fact that his wife was taller than him.

“He hated that,” Tolliver-Lopes said. “He was the type that couldn’t keep his mouth shut. He was too narcissistic. It would always be ‘me this, me that. I’m the best. Me, me.’ He was very dominant.”

Saturday’s ambush began at around 1:30 p.m., with a call reporting a white van with guns and bomb-making material visible inside on Jamison Creek Road, near the unincorporated Santa Cruz County area of Boulder Creek. When deputies arrived, they saw the van pulling away.

They attempted to follow it, finally locating the van at a Ben Lomond home, according to Santa Cruz Sheriff Jim Hart. There, he said, deputies were ambushed with gunfire and improvised explosives.

Gutzwiller was shot and transported to a hospital, where he was pronounced dead. The second deputy was either shot or struck by shrapnel and was struck by a car as the suspect fled the property. The deputy who was critically injured remained hospitalized Monday.

Soon after the ambush, authorities received calls of a carjacking nearby. After an exchange, authorities apprehended Carrillo.

Tolliver-Lopes said she always had a bad feeling about Carrillo.

“He had dead eyes. He didn’t strike me as the type of man who had any empathy. He looked at you, but he didn’t see you for you. He just saw somebody beneath him,” she said. “I got bad vibes from him.”