A stolen Humvee mowed down the locked gate of the Washington Army National Guard armory in Pasco Friday night. Kerry... 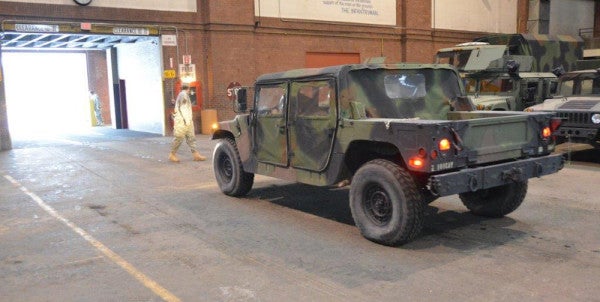 A stolen Humvee mowed down the locked gate of the Washington Army National Guard armory in Pasco Friday night.

Kerry E. Brooks, 24, is accused of entering the armory compound and starting up the Humvee.

It crashed through the compound’s chain link gate topped with razor wire at the Clark Street armory.

The Humvee later showed up at the gate of the Yakima Training Center.

When asked for identification at the entrance to the center, the driver said he had taken the Humvee from the Pasco armory.

He had arrived at the training center to join the Army, he said, according to Pasco police.

Brooks was arrested on suspicion of theft, malicious mischief and burglary and booked into the Franklin County jail.

Brooks is from Benton City, but recently had been staying at the Tri-City Union Gospel Mission in Pasco, according to police reports.

A Humvee looks only a little worse for wear after it was driven through the chain link gate at the Army National Guard armory in Pasco.