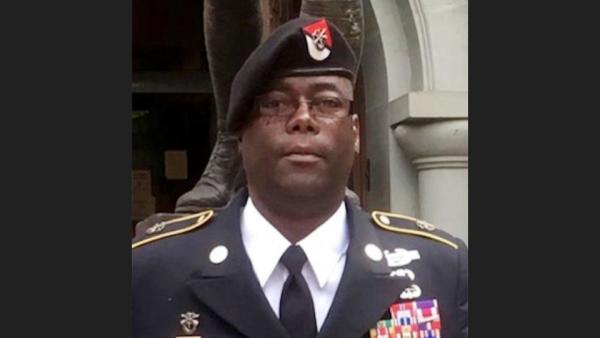 Papotia Reginald Wright started the 8th Special Forces Regiment New York Honor Guard more than a year ago to perform burial services for veterans. But according to investigations by multiple groups, the supposed Special Forces veteran vastly inflated his military service, including medals for valor, and his group has since shut down.

Wright claimed to be a retired command sergeant major from Special Forces and used his fraudulent claim to run a veterans service organization with no official nonprofit status in Brooklyn, N.Y., according the state Attorney General’s office. Military records seen by Stars and Stripes show he served in the Army from 1982-90 as a truck driver who never ranked higher than a specialist – a far cry from his claims of combat service.

Photographs show Wright in full dress uniform at promotional events including a New York Giants game. Most of his decorations – a Bronze Star, Purple Heart and others – are allegedly fake, according to Steve Antson from Guardians of the Green Beret, a watchdog group that works to expose people pretending to be part of Special Forces.

According to federal law under the Stolen Valor Act, it is a crime to lie about military awards for monetary or other tangible benefits.

Wright, who goes by “Reggie,” told Stars and Stripes that his rank is honorary, not an attempt to mislead.

“Because I started the unit (the Honor Guard), I was the top NCO there,” he said. Wright has said he never claimed to be in Special Forces specifically, but that he drove trucks for the 75th Ranger Regiment and 5th Special Forces Group as an attachment.

As part of the Army’s Authorized Provider Partnership Program, organizations like Wright’s can perform military honors for funerals of former military personnel or honor guard ceremonies for events. “When they couldn’t take up the slack, we were called,” Wright said of the Army.

According to its now-defunct Facebook page, the “8th Special Forces Regiment New York Honor Guard is a Veteran Service Organization (VSO) that renders final honors to Veterans with an Honorable Discharge or General Discharge with Honorable conditions.” It is based at the Park Slope Armory building on 8th Avenue in Brooklyn.

The name is an apparent reference to the 8th Special Forces Group, which conducted counterinsurgency operations and training in the backdrop of the Cold War in Latin America. The unit was disbanded in 1980.

The Guardians of the Green Beret said they have been aware of the Honor Guard for about two months, after being alerted by another watchdog organization called Guardian of Valor that Wright was exaggerating his military service to promote the Honor Guard.

Wright claimed he had been part of the “Black Hawk Down” incident in Mogadishu in 1993 that led to the deaths of 18 U.S servicemembers, Antson said. Wright’s service ended in 1990, according to his personnel record.

Multiple people confirmed to Antson that Wright told the story of an enemy fighter who snuck up behind him and cut his kidney out. “He’s saying he is walking around with half a kidney,” he said. Wright never received a Purple Heart, according to his military records.

An official at Fort Hamilton in Brooklyn, who wasn’t permitted to talk on the record, said no one questioned Wright’s rank and credentials at the base, and he used that to gain access to government vehicles “for whatever reason.”

The pace was frenetic, Johnson said. They attended an annual Heroes Gala event by Iraq and Afghanistan Veterans of America where he met former Army Gen. David Petraeus and other well-known military figures. He worked with Wright at a New York Giants game and at the Nov. 10 reopening of the Times Square recruiting station after its renovation.

“I got caught up so quickly in the events,” he said, eventually leaving the group because of the time commitment it required.

He said he was “crushed” by the revelations about Wright’s inflated service record and self-promotion.

“I believed in the organization. It was a feeling of pride to put on the uniform again since I was always proud of my military service,” he said. “It sunk my heart.”

The Honor Guard website was taken down after accusations of fraud were made. Its Facebook page states in its last post on Nov. 29 that “information has been posted on the Internet which we were not aware of until this month of November 2017. As a result we will look into the matter, therefore we will be closing our social media until further notice.”

The post was signed by Maj. Tammy Feliciano from the group’s S-1 office, referring to personnel management sections in Army headquarters units.

The Guardians of the Green Beret claim they have been able to find no evidence that Feliciano served in the military after a Freedom of Information Act request to the National Personnel Records Center.

She could not be reached by Stars and Stripes for comment.

“If people don’t want us to bury veterans, that’s a shame. That is what our mission was,” he said.