A strange thing happened when I married a soldier. Whenever I mentioned my husband’s occupation, my subsequent words, whether controversial... 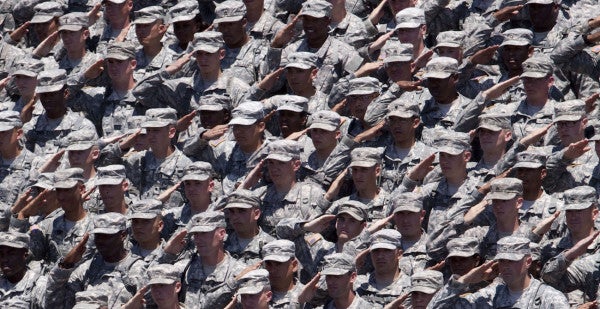 A strange thing happened when I married a soldier. Whenever I mentioned my husband’s occupation, my subsequent words, whether controversial or trite, would be greeted with the wide eyes and reverential nods Americans now reflexively offer members of the military community. Sometimes I’d even get an awkward, earnest “Thank you for your service,” or “That must be so hard.”

Our worshipful national attitude toward the military has been on full display during this presidential campaign season, and both major parties have been eager to exploit it. The Republicans trotted out retired Army Lt. Gen. Mike Flynn to tell Americans they should vote for Donald Trump instead of Hillary Clinton. The Democrats countered with retired Marine Gen. John Allen, who urged Americans to do the opposite.

Then came the Gold Star family episode. Trump has spent the entire campaign season insulting one group after another — Women! Immigrants! Democrats! Muslims! African-Americans! — without apparent consequence. But when he spoke slightingly about the parents of a Muslim American Army officer killed in Iraq, he instantly found himself on the receiving end of bipartisan public condemnation.

To GOP House Speaker Paul Ryan, Trump’s comments were “beyond the pale”; to former Republican contender Jeb Bush, they were “so incredibly disrespectful of a family that endured the ultimate sacrifice for our country.” A coalition of military support and advocacy groups signed an open letter calling on Trump to apologize, declaring, “Nothing is more sacred or honored than our Gold Star parents.” “We work in a sacred space,” explained one of the signatories. A Gold Star family is “a sacred family,” added another.

Soldiers of 1st Brigade Combat Team, 34th Infantry Division salute the American flag as the United States anthem is being played during their departure ceremony at historic Fort Snelling May 22, 2011.U.S. Army photo

This is the language of theology, not civics. And while only someone with a heart of stone could belittle the grief of parents who have lost a child, our national sanctification of the military makes me deeply uneasy.

To call something “sacred” is to insist that it’s beyond the realm of politics. But the military — and the wars we ask it to fight, and the human pain that inevitably accompanies those wars — can’t be placed wholly outside the political realm. Nor should it be, if we wish to retain the ability to debate the questions most essential to a democracy: What wars should we fight? Why, how, and at what cost?

At the same time, placing the military into the realm of the sacred paradoxically turns it into the ultimate partisan prize. The military is the only public institution still trusted by a large majority of Americans, which is why both parties now routinely seek endorsements not only from generals but also from veterans and military families, hoping the military’s consecrated aura will blind us to the tawdriness of campaign season attack ads and sound bites.

These endorsements are effective: Recent studies have found they can help a candidate or cause. But how long will that be the case? As former Chairman of the Joint Chiefs of Staff Gen. Martin Dempsey has pointed out, partisan military endorsements can erode the very professionalism that makes people respect and trust the military in the first place.

I also worry that treating the military community as sacred tempts us to undervalue other forms of service and sacrifice. When well-meaning strangers tell me that being a military spouse “must be so hard,” I often want to tell them that being married to an Army officer wasn’t that hard — not really, not compared to what plenty of other people go through.

Yes, there were lonely times: separations and deployments when I had only his distorted FaceTime image on the computer screen. But I know dozens of families who’ve gone through similar separations, not because of military assignments, but due to the ordinary vagaries of life: a new job; a sick parent to care for; a loved one who can’t get a green card. All over America, families are separated.

And all over America, men and women make sacrifices and take risks. Some, like my husband, choose the risks and rewards of a military career. Others choose less recognized but equally important public service careers, becoming police officers and social workers, emergency room nurses and public school teachers, firefighters and Peace Corps volunteers. And others still don’t choose at all, but have sacrifice and sorrow thrust upon them: a child killed in a school shooting or a drive-by shooting, or a maybe just a traffic-stop gone terribly wrong.

Rosa Brooks is the author of “How Everything Became War & the Military Became Everything.” She wrote this for the Los Angeles Times.