U.S. aircraft operating over Syria have been taking out stranded ISIS fighters one or two at a time in recent... 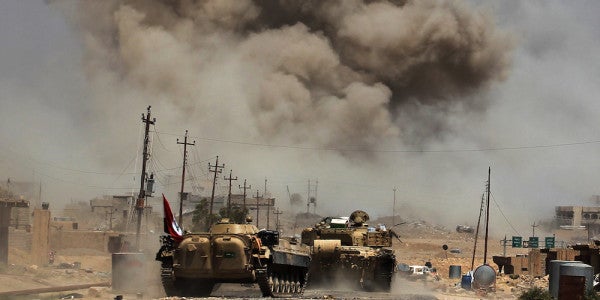 U.S. aircraft operating over Syria have been taking out stranded ISIS fighters one or two at a time in recent days, as a convoy of the group's militants remains stranded in the desert, according to a Foreign Policy report.

Eight days ago, a convoy of 17 buses carrying 300 to 500 fighters and their families left the eastern side of the country after a truce was reached between surrendering ISIS fighters and Syrian government forces, which are backed by Hezbollah.

The U.S. has objected to the truce, and in the days since the convoy departed, US aircraft have targeted 40 vehicles and any members of the convoy who stray too far from the main group.

“Whether it's to evade by foot or to relieve themselves if they make it far enough out there for us to strike, then we will,” Army Col. Ryan Dillon told Foreign Policy.

Last week, U.S. airstrikes destroyed a bridge and made a road impassable, and the convoy has since been stuck between the Syrian cities of As Sukhnah and Abu Kamal, the latter of which is on the border with Iraq.

U.S. aircraft have blocked what's left of the convoy from reaching Deir ez-Zur, an ISIS stronghold. (Syrian government forces recently broke a years-long ISIS siege around Dier ez-Zur, but the terrorist group still has positions in the area.)

ISIS has suffered a number of defeats in Iraq in recent months but maintains control in a rural area between Mosul and Baghdad as well as around the Qaim border crossing with Syria, which sits opposite the city of Abu Kamal.

U.S. Central Command said it has allowed the convoy to be resupplied with food and water and has not struck it directly.

A vehicles waiting to transport Islamic State (IS) group members is seen in the Qara area in Syria's Qalamoun region on August 28, 2017 as part of a deal between Hezbollah and IS fighters where the jihadists would leave to eastern Syria.Photo via AFP/Getty Images

CENTCOM has also sent a message to the Syrian government, via Russia, warning that the U.S. would not allow Damascus to drive ISIS fighters east to Iraq.

“Irreconcilable ISIS terrorist should be killed on the battlefield, not bused across Syria to the Iraqi border without Iraq's consent,” Brett McGurk, the U.S. envoy to the international coalition fighting ISIS in Iraq and Syria, tweeted on August 30.

“The Syrian regime is letting women and children suffer in the desert,” Lt. Gen. Stephen J. Townsend, commander of the Combined Joint Task Force — Operation Inherent Resolve, said in a statement on Monday. “This situation is completely on them.”