Well-wishers from across Oklahoma and the United States traveled to Perry, Oklahoma to give him a proper sendoff and see to it that his life was not forgotten. 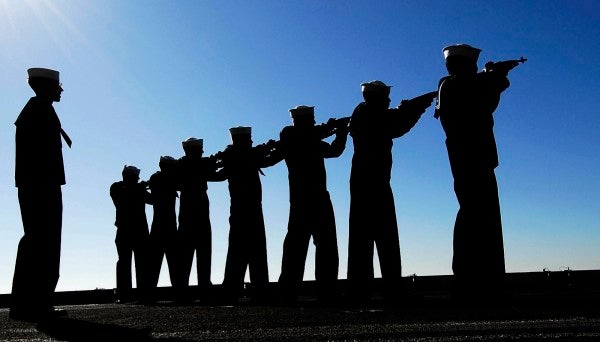 He died in old age with no known surviving relatives, but on Wednesday morning, hundreds of people gathered graveside to honor the life and service of Herman Augusta White, a quiet Navy veteran who spent the last two decades without his wife and only son.

Well-wishers from across Oklahoma and the United States traveled here to give him a proper sendoff and see to it that his life was not forgotten.

Among the hundreds in attendance was Michael Ruth of Tulsa, who also served in the Navy, decades after White earned an honorable discharge after serving in World War II.

Like many of those gathered around White's casket on a steamy September morning, Ruth learned of the story of the gentle Navy veteran on social media.

“I saw he was a Navy vet and saw that he didn't have any family,” Ruth said. “He made a choice. The same choice I made. There is no other bond like that. I'm glad I came out.”

White was born Dec. 1, 1921, in Wayside, Oklahoma, to Andrew Thomas White and Zula Mae Logan White. On Sept. 24, 1941, he married Evelyn Gertrude Leniger in a Baptist church in Broken Arrow.

At 24 years old, White left his wife in Oklahoma to join the U.S. Navy. After training in San Diego, he was stationed aboard the USS Muliphen.

White made the rank of Seaman 2nd Class V-6 USNR-SV. He earned the Victory Medal and the Asiatic-Pacific Campaign Medal.

About five years after returning home from the Navy, White started a family. His only child, a son named Mickey, was born, Dec. 19, 1951, in Perry.

White worked in the oil and gas field, doted on his boy and loved taking family vacations. His house was filled with family photos. His wife died in 1998. His son died in 1999.

In the years after he lost his family, White could be seen around Perry, playing dominoes at the Senior Citizens Center or drinking coffee at Mr Convenience.

When Rebecca Raines, funeral director of Brown-Dugger Funeral Home, discovered White had no known surviving family, she began the push for a proper funeral service.

The funeral home bought a casket for White, who had bought a burial plot next to his wife and son.

Around 9:20 a.m. Wednesday, the rumble of motorcycles adorned with American flags was heard throughout Perry as Patriot Guard riders escorted White's body to the grave site.

“Every one of us is here because of the life he lived,” said Nathan Boon, a Navy chaplain.

During the service, commendation letters from President Donald Trump and Gov. Kevin Stitt were read. Oklahoma lawmakers called on their fellow Sooners to honor White.

“It's heartbreaking to think that this American hero so selflessly and bravely served his country in World War II and now has no family to honor and remember him at his funeral,” said state Sen. Paul Rosino, R-Oklahoma City, a 25-year retired Navy veteran. “He deserves a proper hero's goodbye with his fellow veterans and Oklahomans there to celebrate his service and life.”

Scriptures were read during the service. A bagpiper played “Amazing Grace.” Red, white and blue balloons were released.

After the service, Navy and other military personnel lined up, and one by one in front of his casket, saluted White.