The humble rise and disgraceful fall of ‘Straw Hat Bandit,’ a Navy vet who robbed banks to pay rent and dental bills

"I remember the tellers saying he was overly polite. His demand notes said 'please' and 'thank you.'" 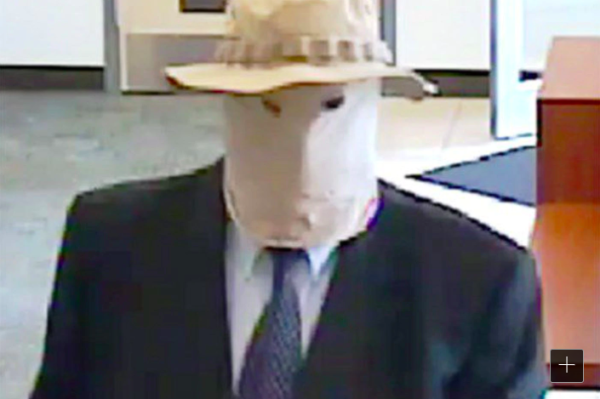 John Dillinger robbed 24 banks before he died in a firefight with federal agents in 1934. Charles “Pretty Boy” Floyd hit as many as 30, while Bonnie Parker and Clyde Barrow stuck up 15.

Richard Boyle's nine-year crime spree across the Philadelphia suburbs may not have earned him their level of criminal infamy. But in sheer numbers, he racked up a record to rank among them all.

Boyle — a mild-mannered father of four from Bucks County dubbed “The Straw Hat Bandit” for the distinctive disguises he donned during his crimes — was sentenced Wednesday to 71 years in prison after robbing an eye-opening 19 banks between 2007 and 2016.

Richard Boyle (left) pictured in a mugshot after his previous arrest for bank robbery. Before identifying him as a suspect in his more recent thefts, the FBI released this composite sketch (right) of their man they suspected of being the “Straw Hat Bandit.” (FBI photo)

But his is not the story of a wayward soul with desperado dreams and the flashy spending habits to match. Despite stealing more than half a million dollars over the course of nearly a decade, Boyle used his ill-gotten gains mostly to pay his bills.

Boyle, 60, said little when granted the opportunity to explain his crimes in court. After insisting on firing his lawyer and representing himself, he politely declined to offer a defense. Facing a 68-year mandatory minimum sentence, he respectfully maintained his innocence.

But U.S. District Judge Gene E.K. Pratter wasn't buying his unassuming affect Wednesday, calling him “a bit obdurate,” and dismissed the notion he was driven to crime by financial distress.

“You are no Jean Valjean, sir,” she said, referring to the Les Misérables protagonist who was sentenced to 19 years of hard labor for stealing bread to feed his family. “You had enough skills that you did not have to steal to make money.”

Unlike the notorious American bank robbers prosecutors compared him to, Boyle's origins in the business are remarkable only for their extraordinary ordinariness.

Raised in Arizona and South Florida by an abusive father, he ran away and joined the Navy in 1977, found work as a surgical assistant after he was discharged, and eventually settled into a middle-class life with his wife and children in Plumstead Township.

But work was slow and money routinely tight. The family fell behind on rent payments and bills kept piling up.

Deep into his 40s, Boyle read a story about a bank heist in a local newspaper and thought he could do it better, his former lawyer Craig Penglase recalled. So, Boyle put on a loud Hawaiian-print shirt and a big straw hat and put his outlandish plan into action.

“This was the kind of guy you don't forget,” Penglase, who represented him in an earlier state case, told The Inquirer at the time of Boyle's 2017 arrest. “It struck me before that he was just embarrassed that he couldn't afford to support his family.”

Over two years, Boyle managed to steal $102,000 from eight banks in Bucks, Montgomery, Northampton, and Lehigh Counties without ever brandishing a weapon.

“I remember the tellers saying he was overly polite,” Penglase said. “His demand notes said 'please' and 'thank you.' One of the tellers said that had it not been her bank's policy just to turn the money over to would-be robbers, she might not have. She thought he might just have walked away.”

Though Boyle was caught in 2008 and served 3½ years in state prison, he picked up his old habits again within a year of his release.

The reasons for Boyle's robberies hadn't changed, but his methods certainly had.

Richard Boyle, who earned the nickname “The Straw Hat Bandit” after a string of 19 bank robberies, appears in a series of surveillance camera video images taken during some of his thefts.(FBI photos)

This time — starting with the May 2012 robbery of a Colonial American Bank Branch in Horsham — he developed a distinctive signature that would eventually lead FBI investigators to his door.

Covering his face with a makeshift sackcloth mask and donning his distinctive hat, Boyle terrorized bank employees at gunpoint demanding they open their cash drawers and vaults. He targeted banks near holidays and weekends when he knew there would be more cash on hand.

In some of his 11 new crimes, he spread bleach on the floor to cover his DNA. And he routinely placed hoax 911 calls to keep local police distracted before his robberies.

Before robbing First Federal Bank in Wrightstown in September 2012, Boyle called in a bomb threat to nearby St. Mary Medical Center, prompting hospital staff to evacuate ill and injured patients and the Federal Aviation Administration to clear the airspace overhead.

His report of an active shooter at Temple's Ambler campus before another robbery the next year drew more than 20 assault-rifle-toting officers from six different departments, sent students fleeing across the quad, and culminated with police pointing weapons at a maintenance worker, who they believed could be a suspect, as he cowered in fear in a shed.

“There are bank robberies, and there is what Mr. Boyle did,” Livermore said. “When you consider the victims inside the bank outside the bank, the damage that he did, he's more than earned that … sentence.”

This time, too, Boyle grew increasingly willing to spend his cash on luxuries. Although he started out as before paying off credit cards, rent, dental bills, and other mundane debts, he splurged over time on things such as a $4,300 Rolex watch and a monthlong vacation he took with his son to the Florida Keys.

But as U.S. Marshals led him away at the conclusion of Wednesday's hearing, he exuded none of the brio of a high-rolling Dillinger, a “Pretty Boy,” a Bonnie or a Clyde.

Slump-shouldered and sighing, Boyle deferentially trudged off to spend the rest of his life in prison.