Stricter ID Requirements Coming To This Base Next Month

Some visitors to Fort Bragg will need additional identification to gain access to the post starting in January. Officials with... 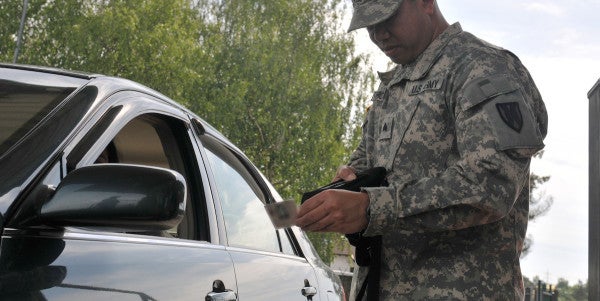 Some visitors to Fort Bragg will need additional identification to gain access to the post starting in January.

The requirements are part of the long-delayed enforcement of a federal law known as the REAL ID Act. It also affects other military installations in North Carolina, including Camp Lejeune, and other federal facilities, such as federal courthouses.

“As it stands right now, visitors to Fort Bragg without a REAL ID will need a second form of ID after January 22, 2018,” said Timothy Prevost, captain of the guard at Fort Bragg.

The vast majority of those who enter Fort Bragg each day — service members and family members with a military ID — will not be affected by the new requirements, a post spokeswoman said.

The law creating REAL ID was born out of recommendations from the 9/11 Commission report in 2004. That report noted that preventing terrorists from obtaining state-issued identification documents was critical to national security.

The law serves as a mandate on federal agencies, and participation by states is voluntary, although federal agencies are prohibited from accepting identification from noncompliant states for many official purposes.

Enforcement of the law has been repeatedly delayed in recent years to give states more time to comply with the law.

Eventually, a new REAL ID-compliant license or other acceptable forms of identification will also be required for domestic air travel. The Department of Homeland Security said REAL ID will be enforced for such travel starting Oct. 1, 2020.

Fort Bragg began enforcing parts of the REAL ID Act last year, when it stopped accepting driver’s licenses from states that were not compliant with the law.

Residents of North Carolina can obtain a REAL ID-compliant license at their local Department of Motor Vehicles office, but will require their current driver’s license along with official documents showing their Social Security number and proof of residency.

Those without a REAL ID will need additional documents to obtain a visitor’s pass to Fort Bragg, officials said. Those documents can include a U.S. passport, permanent resident card, foreign passport with temporary I-551 stamp, a U.S. military or draft record or a Native American tribal document, among other forms of identification.

Visitors with a current pass to access Fort Bragg may continue using that pass until it expires, officials said. At that time, they would need a REAL ID or additional forms of identification to obtain a new pass.

Fort Bragg requires all visitors to be vetted through the National Crime Information Center prior to receiving a pass.

North Carolina officials have previously said no residents would be required to obtain a REAL ID compliant license. And noncompliant licenses are still issued for those who don’t intend to access federal property of use commercial air travel.

For more information on requirements to obtain a REAL ID in North Carolina, go to ncdot.gov/dmv/driver/realid.

Visit the Stars and Stripes at www.stripes.com