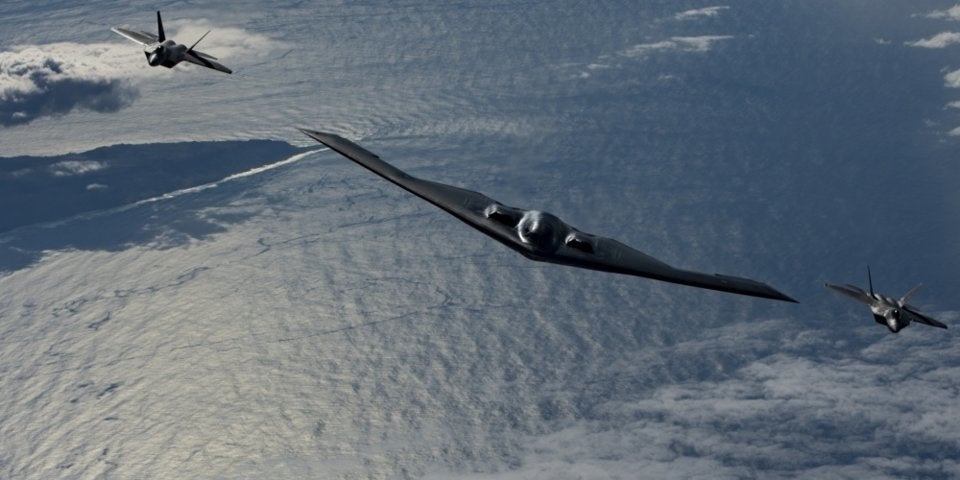 The U.S. Air Force's $2.2 billion B-2 Spirit bombers, a key component of U.S. nuclear deterrence, are protected from “catastrophic” accidents by a $1.25 part designed by a group of high school students.

Switch covers designed by the Stealth Panthers robotics team at Knob Noster High School are installed in the cockpits of all operational B-2 bombers at Whiteman Air Force Base, Air Force officials told Stars and Stripes.

The B-2 is one of the most advanced bombers in the world, as its low-observable characteristics render the 172-foot-wide bomber almost invisible to radars, allowing it to slip past enemy defenses and put valuable targets at risk.

Designed with Soviet air-defense systems in mind, the bomber has been serving since the late 1980s. Recently, a handful of B-2 bombers have been training alongside F-22 Raptors in the Pacific, where China has been expanding its military footprint.

But even the best technology can often be improved.

A B-2 stealth bomber from the 509th Bomb Wing at Whiteman made an emergency landing at an airport in Colorado Springs, Colorado after an in-flight emergency last fall, Air Force Times reported, noting at the time that the incident was under investigation.

Apparently, the emergency was triggered by the accidental flip of a switch, among other unusual malfunctions.

“The B-2 Spirit cockpit is equipped with state-of-the-art, cutting-edge technology, but is a very cramped space, so something was needed to keep the pilots or other items from bumping into the switches,” Capt. Keenan Kunst explained to Stars and Stripes.

There are a series of four switches that are of particular concern. “The consequences could be catastrophic — especially if all four were flipped, in which case, ejection would be the only option,” Kunst told Stars and Stripes. “We recognized the switch posed a certain risk of inadvertent actuation and that we should take action to minimize this risk — no matter how small.”

And that's where a handful of Missouri high schoolers had the answer to this particular problem.

Base leaders already had an established relationship the school, and some of the pilots had been mentoring members of the robotics team. Base personnel presented the issue to the students, and they began developing a solution. Working with pilots in a B-2 simulator, they were able to design and test the suitable switch cover.

WATCH NEXT: A B-2 Spirit In Action