Russia announced earlier this month that the Su-57, its proposed entry into the world of fifth-generation stealth fighter aircraft, would... 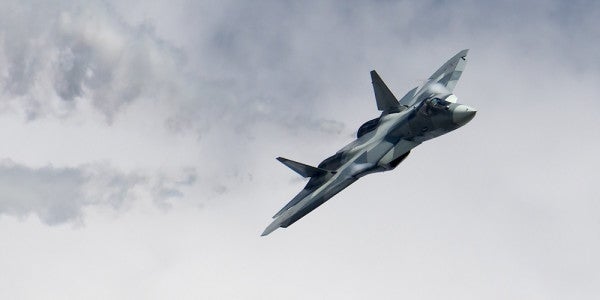 Russia announced earlier this month that the Su-57, its proposed entry into the world of fifth-generation stealth fighter aircraft, would not see mass production.

“The plane has proven to be very good, including in Syria, where it confirmed its performance and combat capabilities,” Russian Deputy Defense Minister Yuri Borisov said on Russian TV on July 2, as reported by The Diplomat.

But despite Russia's nonstop praise for the plane and dubious claims about its abilities, Borisov said, per The Diplomat: “The Su-57 is considered to be one of the best aircrafts produced in the world. Consequently, it does not make sense to speed up work on mass-producing the fifth-generation aircraft.”

Justin Bronk, a combat-aviation expert at the Royal United Services Institute, told Business Insider that Borisov's comments “could be charitably described as an unreasonably optimistic reason why they stopped production.”

Basically, Borisov said the plane is so much better than everything out there that Russia doesn't need to build it — a claim Bronk finds unlikely.

Instead, Russia will stick to what it's good at, with upgraded fourth-generation aircraft in service instead of the Su-57, which was originally meant to replace the older fighters.

The Su-57, a plane designed to function as a killer of U.S. F-35 and F-22 stealth jets with an innovative array of radars, saw a brief period of combat over Syria, but the deployment lasted only days and didn't pit the jet against any threats befitting a world-class fighter.

Initially proposed as a joint project with India, the Su-57 hit trouble when neither side could agree on how to split the production and technological development. After 11 years in the program, India withdrew, leaving Russia to go it alone with a weak economy.

Now, India has been discussed as a potential buyer of the F-35 in another blow to Russia's dream of developing its own fifth-gen fighter.

A senior stealth scientist recently told Business Insider that though the jet claimed a stealthy profile, it had glaring and obvious flaws. A 2016 report from IHS Jane's said the jet was fifth-generation “in name only.”

But the Su-57 carries a massive payload and was expected to one day carry nuclear weapons. Like the Su-35 before it, had super maneuverability beyond that of any U.S. jet.

By all means, the Su-57 appeared a next-level dogfighting jet capable of taking out the US's best fighters in close combat, but its failure to integrate stealth made getting in close with an F-35 or F-22 an unlikely bet.

Bronk said Russia must have looked at the program and realized that it didn't have the potential — even with upgrades and maturation — to ever work out to be worth the price. At about $40 million a unit, Russia's Su-57 is less than half the price of an F-35, but considerably more expensive than its other jets.

For that price, according to Bronk, Russia can just put the fancy radars and missiles on its older planes in greater numbers, as the Su-57's airframe was never really stealth in the first place.

Russia is working on new tanks, submarines, and nuclear weapons, all of which tax its already large defense budget. With other projects going forward, it appears the Su-57 has become the first casualty of a budget crunch.

As the U.S.'s F-35 starts to come online in significant numbers and China's J-20 stealth jet deploys in earnest, it looks as if Russia is getting left behind in the world of top-class militaries.