A high-ranking submarine officer has been sent to prison for eight years after being convicted of sexual-abuse charges from repeatedly... 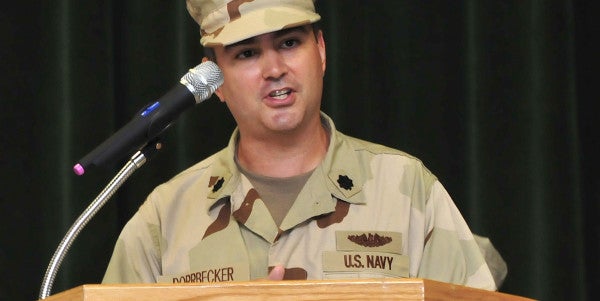 A high-ranking submarine officer has been sent to prison for eight years after being convicted of sexual-abuse charges from repeatedly trying to get together with a teenage girl he met at her summer job on a U.S. Navy base in Italy, the Navy said Friday.

Capt. Alan Dorrbecker was found guilty of multiple counts of sexual abuse and assault of a child, one count of violating orders, and of conduct unbecoming an officer and a gentleman during a court-martial this week at Naval Station Norfolk.

Dorrbecker also will forfeit his pay and be dismissed from the Navy, marking the end of an otherwise distinguished career that included commanding the attack submarine USS Greeneville and serving two years in the Office of the Chief of Naval Operations at the Pentagon.

The charges stem from Dorrbecker's efforts to arrange a meeting with the girl for sexual purposes while was stationed in Naples, Italy, with Naval Forces Europe. The Virginian-Pilot generally does not identify victims of sexual assault.

Charge sheets say Dorrbecker sexually abused and assaulted the girl beginning in August 2015 when he sent her several lewd emails and later attempted to meet with her in November and December of that year.

“I want to hold you close, feel your skin, gently caress your cheek, smell the fragrance of your hair,” Dorrbecker wrote, according to the documents. “My thoughts have more akin to our embrace, imagining what you smell like, the fragrance of your hair, feeling the supple curves of your body melding next to mine, feeling the warmth in your breathing, and the moistness of your lips.”

The documents do not identify the girl's age, but say she was younger than 16.

A Naval Criminal Investigative Service agent who testified at a May hearing described Dorrbecker's actions in the final weeks of the case in shades similar to NBC's controversial “Dateline” hidden-camera series “To Catch a Predator.” On that show, actors posed as children online to ensnare would-be sex offenders attempting to meet victims in person.

According to the agent, Kelly Cichon, Dorrbecker met the girl at her part-time summer job working on the naval base and the two exchanged email addresses. But what Dorrbecker apparently did not know was that the girl's parents, who work for the Navy, became concerned about the communications. NCIS agents intervened, posing as the teen online and in text messages.

The sexual abuse charges relate to two occasions in which NCIS agents set up meetings in which Dorrbecker believed he was meeting with the girl, Cichon said. The first, scheduled on or about Nov. 20, 2015, was cancelled at the last minute by text message by agents posing as the girl.

Dorrbecker was arrested following a second meeting Dec. 2, 2015, in which agents posing as the teen lured him to a townhouse on base after concocting a story about the girl dog-sitting for out-of-town residents. Agents coordinated with base officials to use the house for the sting and outfitted it with surveillance cameras. Dorrbecker arrived with bags packed with clothing, wine, food, condoms and personal lubricant, Cichon said in May.