Suicidal Korea Vet, 84, Shot Dead By Police At His House Over Therapy-Dog Dispute

A despondent military veteran — slated for eviction because of complaints about his service dogs, Roxie and Ranger — was... 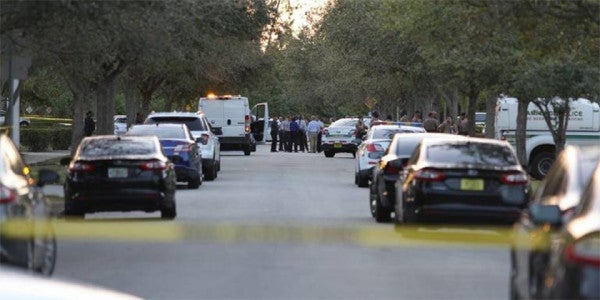 A despondent military veteran — slated for eviction because of complaints about his service dogs, Roxie and Ranger — was shot to death after police say he pointed a gun at officers on Monday afternoon near Homestead.

Raymond Bishop, 84, died inside his home at the Hidden Grove apartments. Miami-Dade police officers had rushed to the home after receiving a call of an armed man threatening to kill himself.

At least four Miami-Dade officers wound up opening fire on Bishop from just outside the doorway where he stood, gun in hand — but only after pleading with him extensively to put his weapon down, law-enforcement sources told the Miami Herald. One officer even praised Bishop’s military background in an attempt to get him to surrender peacefully.

“These officers begged this gentleman to put the weapon down,” said Florida Police Benevolent Association President John Rivera. “They had no choice. These are situations officers are confronted with daily, and it’ll remain with them forever.”

The dogs were inside the apartment and were not harmed, one source said.

Bishop, who served in the Korean War, was upset about the apartment complex’s eviction attempt, according to a neighbor. Bishop lived there, according to court records, under a Miami-Dade County government subsidy program.

“They were throwing him out. He had nowhere to go,” said neighbor Jonathan Rodriguez, who often fed Bishop and took him to the veterans hospital for medical treatment.

Bishop was fighting his eviction from the apartment complex, which went to court in July 2017 to try and get him booted from his ground-floor unit at 13831 SW 270th St. According to the lawsuit, Bishop was “harboring unauthorized pet dogs,” allowing them out without a leash. One of them, the suit said, attacked and injured another resident, according to the suit.

His animals were a 13-pound pooch named Roxie, and a 30-pound one named Ranger. Bishop, who was disabled and used a walker, was being treated for “mood disorder,” according to court records. He also owned fish.

A psychiatrist at the Miami Veterans Affairs Medical Center said the dogs had a “tremendously favorable influence” on Bishop. “Mr. Bishop’s pets, in this case, has provided invaluable emotional therapeutic benefit,” Dr. Ernesto Grenier wrote in a letter filed in the court record.

The case had been in mediation, but talks between the two sides had failed, according to the court record. The case was ongoing.

“He was a really nice guy to talk to,” Brochyus said. “He loved his animals.”